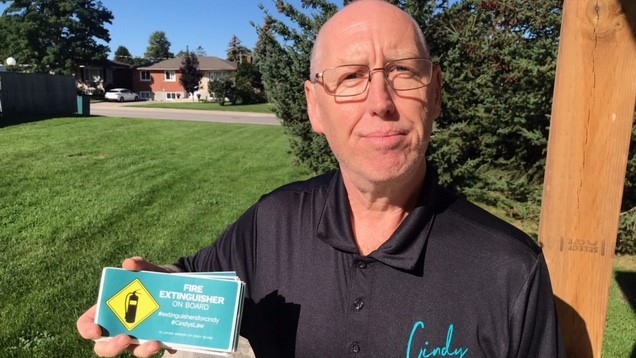 Saturday will mark one year since the tragic loss of 35-year-old Cindy Devine in a fiery collision.

On Oct. 2, 2020, the St. Thomas woman's vehicle was struck on Highbury Avenue between St. Thomas and London.

She survived the crash before her vehicle caught fire. Passersby tried to help but ultimately had to back away.

Cindy died, leaving behind her husband and their four children.

Shortly after the crash, local people in the St. Thomas area began a campaign to put fire extinguishers into as many vehicles as possible.

“To date, three draws, 300 extinguishers for cars and 19 home ones we have given away,” states key organizer Tony Bendel.

‘Cindy's Law’ is the ultimate goal of the campaign. Bendel says it would see provincial legislation requiring all vehicles to carry a fire extinguisher.

“Our goal is to make sure all cars on the road have them. So, we want to get it implemented for your safety.”

While the effort will take time, in the interim, the local campaigns continue to grow.

Bendel says the St. Marys Fire Department is the latest to come on board.

With the support of numerous businesses, the Stonetown community will give away free fire extinguishers this Saturday -- on the anniversary of Cindy’s death.

Fire extinguishers can be picked up starting at 10 a.m. at the fire hall until the supply runs out.

Donations will also be accepted.

“We can only grow from there in Perth County. I’m hoping Stratford, Sebringville, Listowel, Mitchell will all jump on,” Bendel tells CTV News London.

And if they do, he believes the effort will make a difference and, one day, save a life.

Already, the fire extinguisher campaign created in Cindy Devine’s name has made a difference.

“We did hear of one story where there was a fire at a parking lot in a mall in London. Of course, thank God nobody got hurt. But, the person with the fire extinguisher to put it out, had won it in one of our draws.”

Colin Powell, the barrier-breaking soldier and diplomat who served Democratic and Republican presidents in war and peace but whose sterling reputation was stained by his faulty claims to justify the U.S. war in Iraq, died Monday of COVID-19 complications. He was 84.

Half of Canadian parents would vaccinate their 5-11 year-old ASAP: survey

With Health Canada expected to soon begin considering COVID-19 vaccine eligibility for children aged five to 11 years, a new survey by the Angus Reid Institute says that more than half of Canadian parents plan to give their kids the jab as soon as they get the green light.

For many Iraqis, the name Colin Powell conjures up one image: the man who as U.S. secretary of state went before the UN Security Council in 2003 to make the case for war against their country.

The family of an Ottawa man who has been missing since Thursday is offering a $10,000 reward for tips that lead to him being found.

The Toronto homicide detective who solved the killing of Stefanie Rengel says he was left stunned by what the young woman charged with her murder revealed during her police interview.

Do you plan on vaccinating your kids against COVID-19? We want to hear from you

As Health Canada prepares to review the Pfizer-BioNTech data on its COVID-19 vaccine for children under the age of 12, CTVNews.ca wants to hear from parents and caregivers about their plans

House swept away by floodwaters amid heavy rains in India

Dramatic video from India's state of Kerala this past weekend shows a house being swept away by strong river currents amid heavy rainfall in the area.