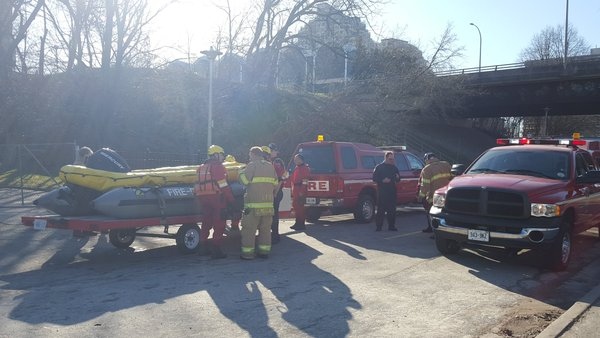 Fire and Rescue crews pack up after successfully rescuing a dog from the Thames River on Tuesday, March 29, 2016. (Justin Zadorsky / CTV London)

A dog is safe and sound after being stranded in the Thames River near Harris Park Tuesday morning.

Fire crews and the marine unit were called to Harris Park around 9 a.m. after a caller reported a dog stranded in the river.

District Fire Chief Al Braatz told CTV News that the dog may have been in the water for as long as 30 minutes.

Braatz says crews were able to quickly launch the rescue boat and get to the dog. The Golden-Lab was clinging to reeds on the far bank of the river. The dog was quickly brough to shore and wrapped in a heat blanket, however the animal was able to walk around on its own.

The owner of the dog has since taken the animal to get medical attention.