Main Street in downtown Exeter was closed for the evening on Friday as crews battled a major fire.

Four area fire departments were called in for a fire above Best Computers around 3:45 p.m. on Friday.

Flames were seen shooting from the second floor of the three-storey structure as crews arrived.

While many buildings in downtown Exeter are connected, this particular building has a driveway on at least one side, which has helped firefighters contain the fire to a single building.

The road was not expected to re-open Friday evening, and residents are being asked to avoid the area. 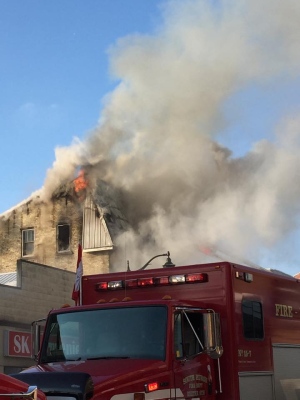