A fire in an upper level unit at London’s Elgin-Middlesex Detention Centre on Wednesday morning that sent two people to hospital is being labelled arson.

Several fire trucks, police and EMS responded to the fire around 11 a.m. as correctional officers rushed inmates out of the building and into a courtyard.

One inmate was quickly taken to hospital, while a manager at EMDC who entered the area of the fire without an air mask was transported to hospital shortly afterwards.

The fire was out and crews left the scene shortly before 1 p.m., however the facility housing more than 400 inmates, remains in lockdown.

Police say an arson investigation is underway and the Ontario Fire Marshal’s Office has also been called in.

Sources tell CTV News the fire was set by inmates in a lockdown situation, not to cause trouble, but to help a fellow inmate.

There are reports an inmate was in medical distress and his pleas weren’t being answered by management.

There are reports that the inmate taken to hospital was the one many believe started the fire in an attempt to get medical assistance.

In the end the fire was contained to a common area in unit four, which houses males in the general population.

At the time of the fire, correctional officers were refusing to work, because they claim there were known weapons in the facility and they didn’t feel safe conducting unprotected searches.

But the Ministry of Community Safety and Correctional Services says all weapons, reportedly fashioned from a light fixture removed by inmates, have been accounted for.

There was also a disagreement over who would search cells, with management wanting guards to conduct searches, while the union representing the guards asking for a specialized team to be called in.

The Ministry of Labour eventually rejected the guards’ refusal to work and all staff members were back performing their duties by around 2 p.m.

Guards are conducting searches, but the specialized crisis team is on standby to help calm the near riot conditions – fuelled in part by a string of recent lockdowns.

There have been three lockdowns at the facility since Easter, with fights, searches and assaults the main reasons, and some units still haven’t fully reopened.

EMDC remains one of the most dangerous facilities to work at in Ontario. 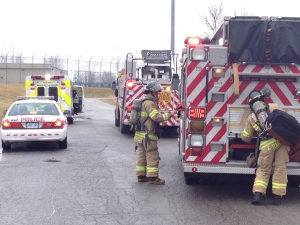 In Pictures: Fire at EMDC