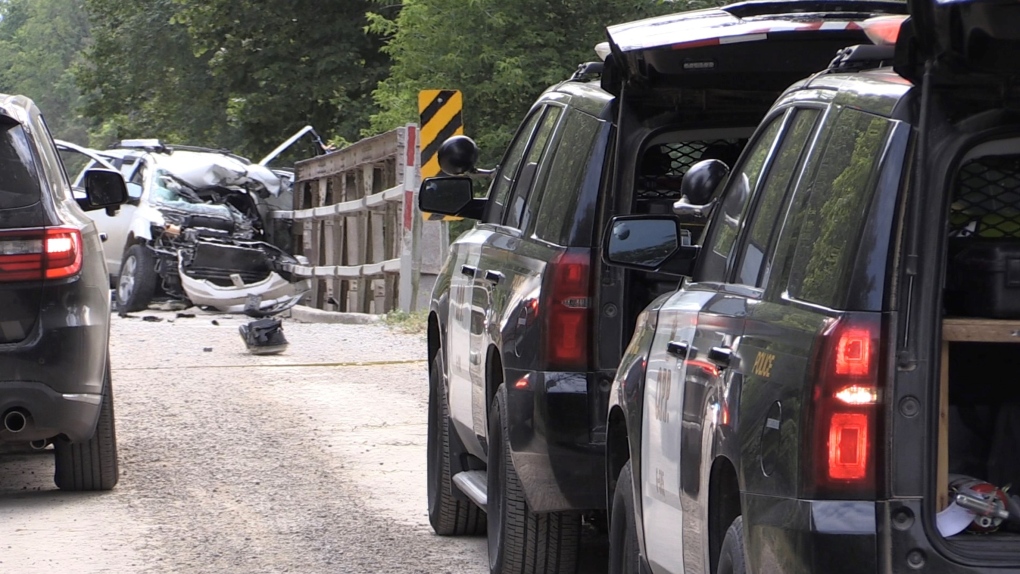 Huron County OPP are on the scene of a fatal single vehicle crash that occurred west of Exeter, Ont. on July 4, 2022. (Daryl Newcombe/CTV News London)

Huron County OPP are on the scene of a fatal single vehicle crash that occurred west of Exeter late Monday afternoon.

According to a press release issued by OPP, at approximately 4:41 p.m. police, fire crews and EMS responded to a report of a car crash located on MacDonald Road near Parr Line.

A crossover SUV collided with the side of a bridge over Black Creek.

The driver, who was the lone occupant of the vehicle, was pronounced deceased at the scene.

Police said the name of the deceased is being withheld following next-of-kin notification.

Members of the West Region OPP Traffic Incident Management and Enforcement Team are on scene and assisting with the investigation.

The scene of Monday's accident is only two concessions south from where 27-year-old Evan Dickins died on June 28 after his pickup truck struck a concrete bridge abutment.

As of 9:15 p.m., MacDonald Road between Parr Line and Ausable Line remained closed for the investigation.

Serena Williams says she is 'evolving away from tennis'

Serena Williams says she is ready to step away from tennis after winning 23 Grand Slam titles, turning her focus to having another child and her business interests.