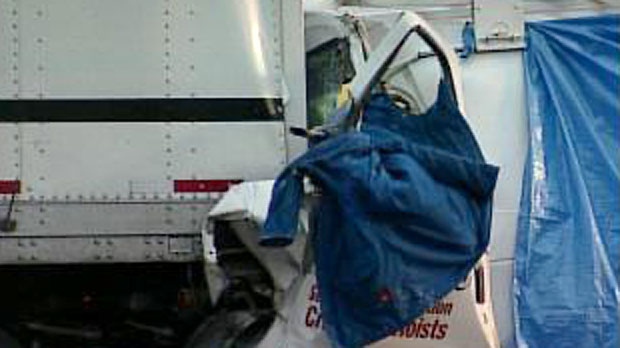 The damage following a fatal two-vehicle collision is seen in Elgin County, Ont. on Friday, Dec. 7, 2012.

An early morning crash that left one man dead and sent another to hospital closed all eastbound lanes of Highway 401 at the Dutton Service Centre for much of Friday morning.

Around 6:20 a.m. an eastbound tractor trailer was struck from behind by a company passenger van. The driver of the van was pronounced dead at the scene.

The driver of the transport truck was taken to St. Thomas Elgin General Hospital as a precaution.

The two-vehicle crash happened just west of Currie Road, and traffic was being directed off the highway at Graham Road while investigators worked at the scene.

The identity of the van driver has not been released. There were no other occupants in the vehicle.

The investigation is ongoing but the highway reopened shortly after noon.