Farmers should throw them 'in the garbage': Health unit issues controversial IDs for migrant workers

Farmers are being asked to fill them out with the employee's name, their date of arrival, address and employer.

Farmer Dusty Zamecnik reads the notice from the health unit to CTV News.

"The purpose of cards is to document that the worker had gone through mandatory isolation as required for every traveller who recently came to Canada," says Zemecnik, the chair of Norfolk County's Agricultural Advisory Board.

"If that's the case, then this card should not say migrant farm worker ID card, it should say traveller from anywhere living in Norfolk County ID card. I have a high degree of skepticism as to what they are trying to achieve from this card."

Dr. Shanker Nesathurai, Norfolk County medical officer of health, says close to 4,500 workers come to the Haldimand-Norfolk region each year. The cards are intended for those who may have trouble communicating.

"When you come from overseas, the only document many people have is a passport," says Nesathurai.

"[That is] a document is one you want to secure. The are voluntary, they are no way required, and they serve for some serve as a convenient purpose."

"What all farm owners should do is voluntarily throw all of them in the garbage," says Cake, who is part of the defence team at Millars Law in London.

He doesn't understand when this card would need to be shown.

"What right does a bylaw officer or a peace officer have to walk up to a citizen and ask them for identification if they don't have reasonable grounds to suspect they are breaking the law," adds Cake.

"If they are piece of identification, they would be given to everybody, not just migrant workers. They also would not have such info of who do you work for? How do we contact them? It's ridiculous."

During Monday’s health unit conference call, the question of "carding" was brought up by a reporter.

Nesathurai says they are doing their best to provide additional services to farmers and he is sensitive to stigma, and states that the fact that cards are voluntarily is an important distinction.

"People who come as migrant workers are entitled to all the civil liberties...of every other Canadians or every other person who lives in this district."

When asked if the cards could be used for an unintended purpose, Nesathurai responded with, "I don't think that would be the case, and I have not seen that actually." 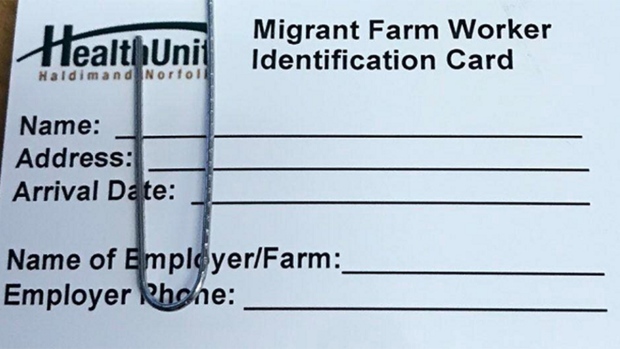 Farmer Brett Schuyler feels the health unit doesn't trust the farmers to follow guidelines, and calls the cards a slap in the face.

"How does this make the worker feel?" says Schuyler. "I’m not giving this to our workers, because I just feel they are offensive."

Cake says the health unit needs to have more trust in their farmers.

"We don't need to be so distrustful of certain segment of the community," adds Cake. "We can't distrust them because they live on a farm...We need to work with the farmers and ensure things are running smoothly so we don't lose acres and acres of crops and we can continue the farming industry."

In a message to CTV News late Monday afternoon, Zamecnik says he is hearing that the cards will no longer be distributed.

It reads in part, "I suspect these social media posts are the result of some farmers being displeased with the Health Unit’s decision to allow no more than three migrant workers to self-isolate in any one living quarters, regardless of its size...The decision has upset a small number of farmers who would prefer to have much larger groups of workers isolating together, citing the cost of finding suitable isolation facilities."

Burgess added that "significant sacrifices being asked of all of us in order to fight the COVID-19 pandemic" and the restrictions have been put in place "to lower the risk of on-farm outbreaks (like the one experienced in the Chatham area), protect the food supply, and protect the local hospital system from being overwhelmed with new cases spread between large numbers of workers self-isolating together."