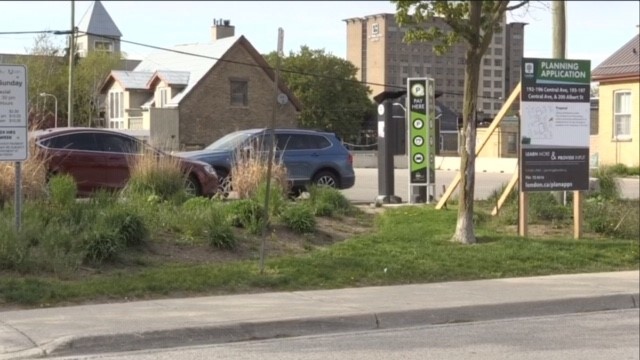 A 'temporary' parking lot could be given another three years of operation by the city.

LONDON, ONT. -- A so-called 'temporary' downtown parking lot could soon be extended into its fourth decade of operation.

First approved by city council in 1992, the temporary parking lot at 192-196 Central Ave. is one of a trio of lots behind Richmond Row seeking three-year extensions from city council.

All three lots are owned by Farhi Holdings.

However, Architectural Conservancy of Ontario (ACO) believes routine renewals every three years reduces the incentive to build on the properties.

“At some point as a community we need to be deciding how much of our downtown area we want to be vacant land with cars parked on it,” says Kelley McKeating, President of ACO London.

Mayor Ed Holder told his colleagues on the Planning and Environment Committee that the lots provide parking for businesses along Richmond Row and events held at Victoria Park.

“Temporary parking I think it’s mis-termed. I think it’s long-term parking, if I’m being realistic about it,” explained Holder.

A consultant for Farhi Holdings told committee members that prior to the COVID-19 pandemic, the lots were well utilized.

Scott Allen of MHBC Planning said his client intends to build on the lots.

“They’re exploring potential infill opportunities at these locations, particularly given the planning permissions that are available,” he added.

The 2017 Downtown Parking Strategy examined parking lot utilization in the core, but did not include the lots behind Richmond Row.

Councillor Steve Lehman suggested more information would be needed before discontinuing the temporary lots that have served the business district for 16 to 29 years.

“Until we have a parking strategy, it wouldn’t be wise to not allow these parking lots to operate for the next three years,” Councillor Lehman told his colleagues.

McKeating doubts, however, that this will be the last extension request for the lots.

“I would be delighted to be proven wrong, but I have zero confidence that anything will advance in the next three years.”

On May 25, city council will make a final decision about the three-year renewals.