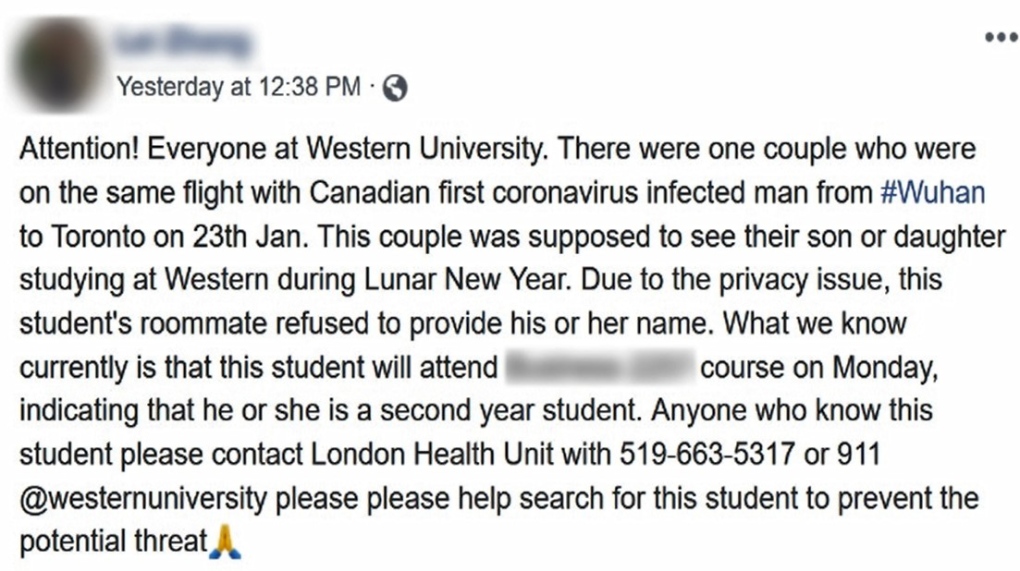 A Facebook post about the coronavirus is believed to have been posted by a Western University student.

LONDON, ONT. -- While there have been no reports of the coronavirus in the London area, concerns continue to grow.

The post indicates that parents who were coming to visit a child who is studying at Western were on the same flight carrying a couple now being treated in Toronto for confirmed cases of the coronavirus.

That flight landed in Toronto last Wednesday, Jan. 22 after travelling from China.

Officials from the Middlesex London Health Unit say, even if this was the case, it's highly unlikely the visiting parents would be infected.

They say only those people seated within two meters of the infected couple would need to be checked for possible coronavirus infection, and those individuals would be easily identified from the flight manifest.

Public health officials say that makes it even less likely that anyone with the virus would have made it to London.

Still, officials continue to say there’s a strong possibility that someone with the virus could be identified in our area at some point in the future.

Can face masks protect you from the coronavirus? Experts weigh in

Map: Tracking the spread of the deadly coronavirus

Canada looking to help Canadians quarantined in China for coronavirus

Canadian companies feel impact of coronavirus as it strikes across sectors

Coronavirus Q&A: Common symptoms and everything else Canadians should know