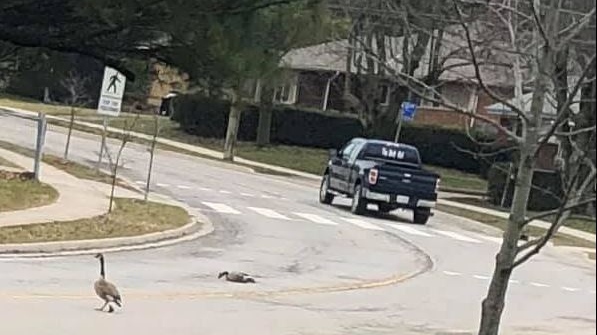 LONDON, ONT. -- A London woman's Facebook post went viral Saturday when she posted a picture of a truck which allegedly drove over a Canada goose on purpose.

Nora Kennedy was looking out her front door when she says she witnessed a pick up truck drive over the goose on Valetta Street in London.

"I saw the one goose decided to hang out in the lane, so I was going to post about it to watch traffic, then a truck revved up, took off and drove over the goose," says Kennedy.

Kennedy says a few minutes later, an official had arrived to pick up the dead goose.

She says she's leaning toward the driver of the truck hitting the goose on purpose.

"There are no cars going eastbound on Valetta, so they could have went around it, but they didn't. Didn't hear him honk the horn, didn't hear him slow down. He should have been able to see that goose at leas," says Kennedy.