Ethiopian Canadians rally in London, Ont. over conflict back home 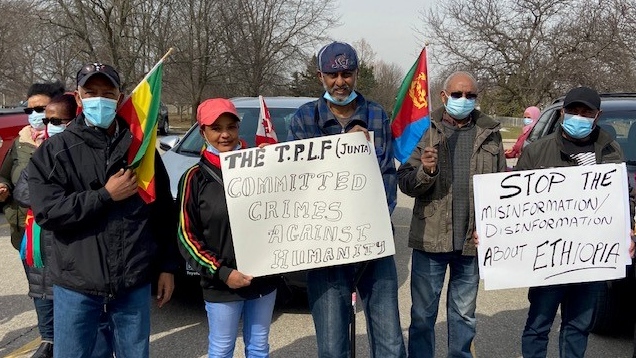 MIDDLESEX CENTRE, ONT. -- About 30 people gathered in London, Ont. on Wednesday to raise awareness about humanitarian issues in Ethiopia.

The rally was part of a Canada-wide event, organized by members of the Ethiopian Association of London, a branch of the Ethio-Canadian Network for Advocacy and Support (ECNAS).

The group is asking the Canadian government for humanitarian support amid four months of growing turmoil in Ethiopia's Tigray province.

In a letter to Prime Minister Justin Trudeau, ECNAS says it appreciates Canada's support of reforms being implemented in Ethiopia.

It continues, "We kindly request the Canadian government to constructively engage with the Ethiopian government to alleviate the humanitarian crisis in Tigray, and support the ongoing reform process, and the effort to restore peace and security across Ethiopia."