Investigators with Environment Canada have confirmed an EF1 tornado hit Grand Bend Sunday night, the eighth to hit the province this year.

The tornado brought down utility poles and trees, leaving thousands without power. An EF1 tornado can bring wind speeds between 155 and 175 km/h.

Hydro One said crews were continuing to work to restore power Monday, and that all homes and businesses were expected to have the lights back on by 11 p.m.

There falling trees and hydro poles crushed cars and sheds and damaged many houses.

OPP say while most main roads and side streets are passable, motorists are still asked to be cautious.

One person was seriously injured as a result of the storm, Environment Canada says it was the result of a fallen tree at the north end of Pinery Provincial Park.

Sunday's bad weather also stretched across the province, with severe thunderstorms all the way from Windsor to Kingston. 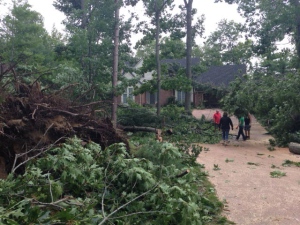