There was major damage at a property near Sparta, Ont. and unconfirmed reports that a tornado touched down.

On Roberts Line, the winds tore part of the roof off a barn and knocked a second barn off of its foundation. There were trees uprooted in the same area.

In London, the fire department said there were multiple active incidents in the city as the storm raged.

“Our communicators are fielding many calls for assistance. We are working with our partners in emergency services. Reports of downed trees, hydro wires, etc.,” the London Fire Department relayed in a Tweet.

Power lines were down across Tecumseh Avenue between Wortley Road and Marley Place as well as on Becher Street, east of Wharncliffe Road. Trees and branches came crashing down on a number of homes and utility lines on that street.

There were other areas of the city that sustained damage and parts of the city and region were without power for a brief time.

Environment Canada issued a tornado warning for Elgin County and severe thunderstorm warnings for all of the region.

Outside of the city OPP responded to more storm damage.

Provincial police closed Mt. Carmel Road between Babylon Line and Bronson Line due to downed hydro poles and there were reports of a barn knocked down. 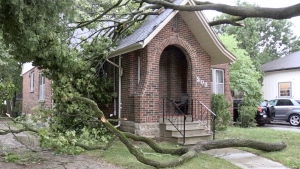