Emergency crews are working removing a freight train that derailed in an international tunnel under the St. Clair River.

There were no injuries in the derailment.

Details posted by Aamjiwnaang First Nation Emergency Planning indicate that at least some of the train cars were carrying automobiles into Michigan, and diesel and motor fluids may have been spilled.

In a statement released Friday afternoon, CN Rail also confirmed that at least one of the cars was carrying dangerous goods, with the tank rupturing and spilling sulphuric acid inside the tunnel.

While the car was carrying about 14,000 gallons of the acid, the company said the substance was contained to the site with no concerns about it getting into the St. Clair River.

Sarnia Mayor Mike Bradley says, "That's serious. It's corrosive, it's toxic. So it's been contained in the tunnel. They're dealing with the emergency, we're dealing on our side with trying to deal with the companies in the valley and also to reassure the public on our side that there are no concerns about public safety. "

It’s unclear what caused the freight train to derail, but James Freed, city manager and chief administrative officer for Port Huron, says it caused "significant damage" to the track on the U.S. side.

On the Canadian side, Sarnia Fire and Rescue Chief Brian Arnold says, "Crews have been working diligently to try and get to the access point, get through to make the investigation, do the reconnaissance, but they encountered substantial damage within the tunnel with overturned cars, debris. "

Other trains headed across the border are being rerouted to a crossing in Detroit. Thousands of train cars usually pass through the tunnel daily.

Bradley says the tunnel, "is part of 'Just in Time' delivery. It's extremely important to our economies. So we'll have to wait to hear from CN how long it's going to take to re-open. But every day that goes by we're talking millions and millions of dollars."

Crews from both sides of the border are working on the situation, but it could take several days to reopen due to the challenging location.

With the derailment being inside the tunnel, clean-up crews cannot use the usual heavy machinery, like cranes, that would normally be used to clear a derailment.

Canada's Transportation Safety Board jas said it is sending a team of investigators to the site and will assess the incident.

The $200-million tunnel was opened in 1996, but this is the first major derailment.

Officials say there are no issues to the integrity of the tunnel structure due to the derailment, but there are reports the tracks themselves are gone.

-- With files from The Associated Press

CTV News is on scene at the train detrailment in Sarnia under the St. Clair River in the tunnel to Port Huron. Crews can be seen assessing the train. pic.twitter.com/Ue3OaYdQvs 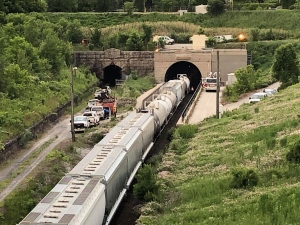