EMDC one of most dangerous facilities for staff

The Elgin Middlesex Detention Centre is one of the most dangerous facilities in Ontario for employees, a CTV News investigation has found.

A corrections officer at EMDC, who we’ll call John, agreed to speak with CTV News as long as his identity is protected because he fears discipline from his employer and retribution from inmates.

He says when staff goes into the facility, they don’t know what they’ll be facing.

“I was just performing my duties, the inmate was being aggressive towards me, so I entered the cell to take him out of the living area and that's when he struck at me."

John was hit several times before the inmate was sent to segregation, a sign of just how dangerous life can be on the other side of the bars.

"There's more safeguards that should be put in place, to protect us," John says.

Through a series of access to information requests, CTV News has learned that EMDC is one of the most dangerous centres to work at in the province.

In the first eight months of 2012, 14 staff members were assaulted by inmates - that translates into nearly ten percent of full-time guards or more than five per cent of all staff.

The Ministry of Community Safety and Correctional Services says in 2011, for example, there were 181 assaults against staff at all institutions in the province.

However, the Ontario Public Service Employees Union, which represents jail staff, says it was 453.

Regardless of whose numbers you use, last year EMDC was one of the most dangerous institutions for staff.

Last fall the provincial government set out an action plan to change things at EMDC, most were supposed to be completed or at least started by now.

But John says even some of the simple things aren't getting done - like searches for contraband and weapons - because there aren't enough staff.

“With a search you're actually going in and going through everything in a cell to look for any sort of contraband, anything that can be produced as a weapon…Searches don't happen anymore so more and more dangerous weapons can be produced inside the institution."

There is also old infrastructure in the facility that adds to the danger, but hasn’t been replaced.

Meal hatches can be rigged by inmates to open from inside their cells. It has led to several assaults where somebody approaches the cell and an inmate inside opens the hatch and stabs or slices the person approaching.

It’s one of the reasons they were supposed to be replaced - with construction starting in October.

John says they can also be trip hazards but “Nothing has happened with the hatches. There has been no work in progress on that. I was told that it’s just far too expensive to, just out of the budget to, replace all the hatches in the institution. But they're a major hazard."

He adds that senior managers and superintendents don't realize just how dangerous it really is, because they are rarely on the floors.

In a statement, a spokesperson for Community Safety and Correctional Services Minister Madeleine Meilleur said they will move ahead with replacing the meal hatches once other security features, such as video camera installation, is completed.

They also say “Searches are taking place on a regular basis” and “daily inspections were instituted to deal with the immediate crisis at the launch of the action plan. Senior staff continue to perform regular inspections to ensure the safety and security of the staff and inmates.” 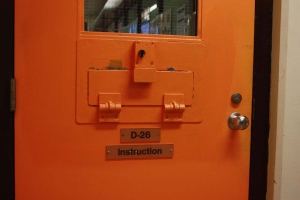 In Pictures: Going Inside EMDC