Many Londoners headed to the polls with ‘voter anxiety,' as Canada's pandemic-era election reached the finish line Monday.

The anxiety covers a wide range of issues in this very different federal election. Much of it, voter Andrea Tonkovic believes, is pandemic related.

“It’s getting on people's last nerves. I feel that is the main concern right now. How are we going to be handling the pandemic in the future because it’s still not over?”

David Nielsen did not hesitate to vote because of COVID-19. But he did become concerned once he entered his polling station.

Nielsen voted inside a hotel conference room near Exeter Road.

He says it was too small.

“Well, it would have been nice if they had a bit more floor space, in there, it’s kind of hard to maintain your spacing.”

Beyond the logistics of casting a ballot is the issue of voting at all.

Some remain angry the election was called, while others predict little will change after the polls close.

“I don’t think so,” a woman exiting the polling station repeated to CTV News London.

“I’m hoping that another party that I’m voting for will have some gains, but I’m not sure about that.”

But her son, Wesley, 25, is hopeful the party he supports will pick up seats nationally.

“I think we might see a few ridings switch NDP. I’m hoping, but I don’t know for a fact.” 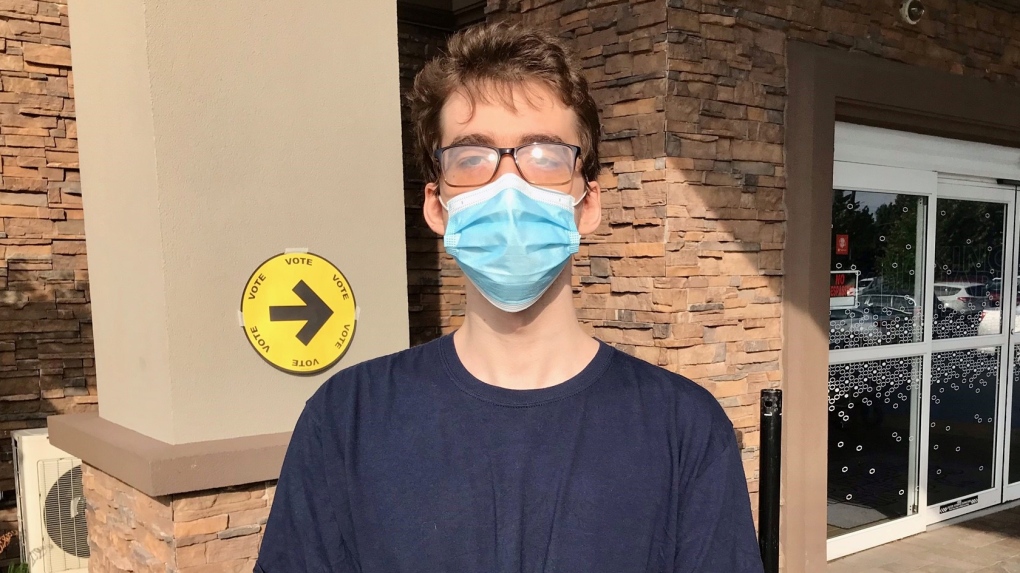 Other voters spoke of the impact the People’s Party of Canada (PPC) might have on seats across Canada, although none here believed the party might actually secure a spot in the House of Commons.

In the end, voters do not believe many ridings will change hands. But we did find one London senior who expressed faint hope the election might improve things in Ottawa.

Where to find voting information

More than 6.5-million Canadians have already voted in advanced polls or through special ballots, but the large majority will cast their vote Monday, including in London’s four ridings.

While there are several ridings in the region, the four ridings that separate London proper are London-West, London North Centre, London Fanshawe, and Elgin-Middlesex-London.

For a refresher on who the candidates are in each riding and those in surrounding counties please follow this link.

London garnered lots of attention from federal leaders during the election with four party leaders making points to visit the Forest City.

Elections Canada has said due to the large number of special ballots it could take some time to determine winners in some of the tighter races across the country.

In some cases they warn it could take up to four days, but most results are expected by the end of the night.

For information on where and how to vote follow this link.

CTV London will have ongoing coverage of the election throughout the day and evening culminating in a special election broadcast at 11 p.m.

You can also tune into 1290 CJBK throughout the evening with local updates every half hour leading up to the 11 p.m. broadcast.

Stay with us for updates and results once they start coming in following the closing of polls at 9:30 p.m.

If an election were to be held today, the Conservative Party would win more seats than the Liberals, potentially enabling Pierre Poilievre to become Prime Minister, the latest seat projections from Nanos Research show.

On the heels of another tense hearing with Hockey Canada's past and current board chairs defending the organization, Prime Minister Justin Trudeau and MPs were unequivocal on Wednesday in their condemnation of Hockey Canada's resistance to making changes that they say are necessary.

The Conservatives are calling on the federal government to allow the importation and sale of foreign language-labelled versions of the same formulations of over-the-counter paediatric pain medication, in response to an ongoing nationwide shortage.

The federal government is asking a judge to dismiss a proposed class-action lawsuit brought forward by a group of Black public servants, who allege discriminatory practices within the public service.

Tom Mulcair: What Legault's win might mean for the future of Canada

François Legault may have changed his separatist strategy but he hasn’t changed his stripes, former NDP leader Tom Mulcair says in an exclusive column on CTVNews.ca.

It's been six months since a Canadian airline crew was detained in the Dominican Republic after finding drugs on board and reporting them to the authorities.

A school board east of Toronto is apologizing after a four-year-old student walked home alone during lunchtime earlier this week.

State of emergency declared in northern N.S., thousands still without power on P.E.I.

More than 16,000 customers in Nova Scotia and Prince Edward Island are still without electricity 12 days after post-tropical storm Fiona hit the Maritimes on Sept. 23. The ongoing outages and restoration efforts have prompted the Nova Scotia government to declare a state of emergency in several counties in northern Nova Scotia.