LONDON, ONT -- “It was scary, it was so scary,” says the driver of a dump truck who was trapped after crashing into a hydro pole on Wellington Road.

The impact caused the pole to fall across the front of the truck leaving live wires downed as well.

Shannon Stanzel was in the cab of her truck for an hour as emergency crews worked to safely remove her.

“I’m so grateful that nobody was hurt,” said Stanzel adding that the emergency crews on scene were great.

Stanzel stayed in the cab as she is trained to do and then was told to stay in the vehicle until hydro crews arrived due to the live wires over the vehicle. 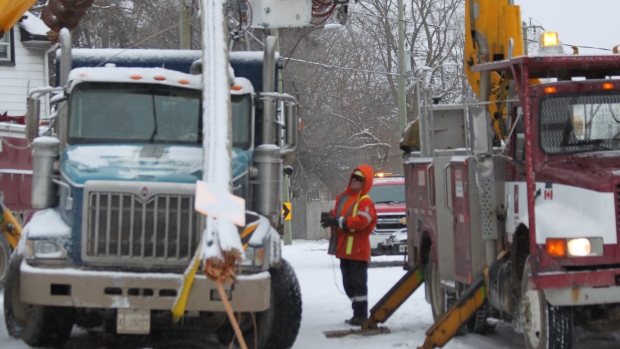 She says that she was taking a load of fill to a city lot, and only travelling about 25 km/h but that the weight of the truck and slick roads took her right into the pole.

Hydro crews will be on scene for several hours to replace the pole and restore power to the area.

Power is out to 150 customers in the area as a result of the crash.

Correction: Intital reports from the London Fire Department said the vehicle was a snowplow.