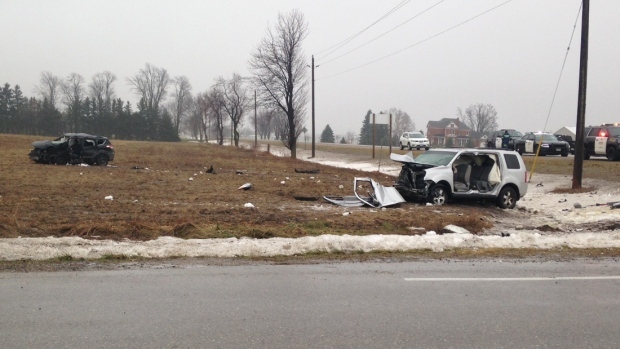 One person was killed and another seriously injured in a collision on Highway 59 near Tavistock on Friday, Jan. 20, 2017. (Alexandra Pinto / CTV Kitchener)

Oxford County OPP have released the name of the 28-year-old woman killed in a crash on Highway 59 near Tavistock.

Stephanie May, 28, of East Zorra-Tavistock Township, was pronounced dead at the scene.

Emergency crews were called to investigate a two-vehicle fatal collision in East Zorra, on Highway 59, at Maplewood Sideroad on Friday.

The crash occurred between a black SUV and a silver SUV.

There were no witnesses to the collision, and it was discovered by motorists who stopped to help.

As a result of the collision, police say May, the lone female driver of the black SUV, was pronounced deceased at the scene.

The lone male driver of the silver SUV was transported by land ambulance to an area hospital with serious injuries.

The collision remains under investigation.