Driver flees after knocking down hydro pole near Exeter, Ont. 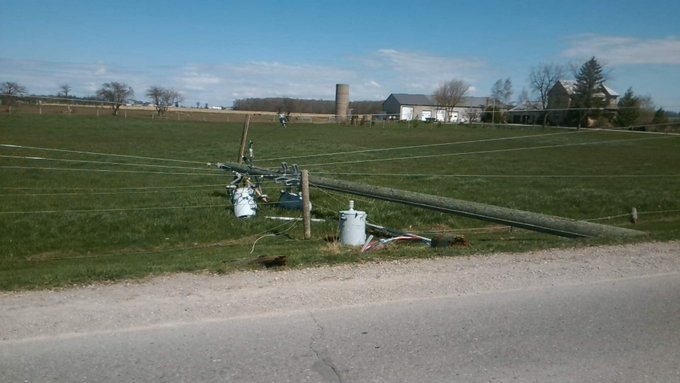 OPP provided this photo of the knocked down hydro pole near Exeter, Ont. on Thursday May 7, 2020.

LONDON, ONT -- If you witnessed a silver Dodge pickup along Airport Line Thursday afternoon near Exeter, OPP would like to talk to you.

The vehicle may have been involved in a crash that knocked down a hydro pole just west of the Huron County community.

The crash occurred sometime around 2:10 p.m.

The driver is described as a man in his 50’s with long dark hair.

Airport Line was closed for several hours while the pole was repaired and police investigated.

Anyone with any information is asked to contact OPP.

Early this week a 35-year-old Waterloo was charged with careless driving after hitting a hydro pole on Perth Line 33.

Police say the driver lost control, hit the pole, and came to a stop in a field.

Police also said the driver was lucky to only suffer minor injuries.

A passenger in the vehicle was not injured.