The driver of a car who fled a three-vehicle crash that involved a London Fire Department vehicle and an off-duty police officer has been arrested.

Platoon Chief Dave Walmsley was in the passenger seat of the London Fire Department vehicle as it headed westbound with sirens and lights activated.

When an eastbound white pickup truck - driven by an off-duty police officer - attempted to pull over, it was struck from behind by a red Ford Focus, which then spun out and was hit by the fire vehicle.

Walmsley says, "This was a very close call that almost resulted in a head-on collision...The message we're just trying to get out is when you see an emergency vehicle, pull to the right and stop. Some vehicles actually just stop in the middle of the road and they do all the wrong things."

But it didn't end there. The driver of the car then took off on foot, climbing a nearby fence, but was soon caught and is facing several charges including leaving the scene of an accident.

London police Sgt. Marcel Marcellin says, "I don't know why he ran, but he was arrested just north of the location here. He was arrested for impaired driving."

More charges are pending as the investigation continues, police say, but fortunately no serious injuries were reported.

Southdale was closed from Tillman Road to Bostwick Road for the investigation and the removal of the damaged vehicles until around 3 p.m. 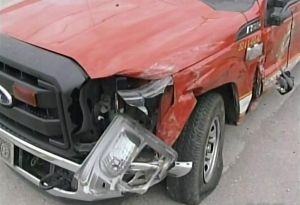