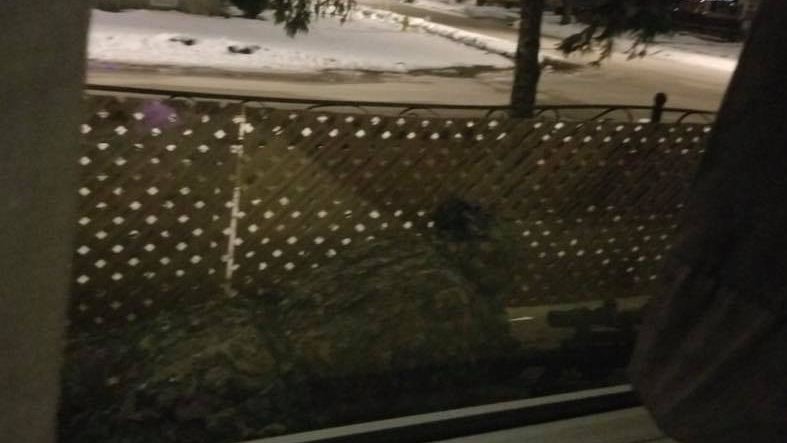 A tactical officer is seen on a resident's front porch during the Argyle investigation on Tuesday, Feb. 11, 2020. (Submitted by Jeff Brennan and Lukasz Dysko)

Residents reported several cruisers in the area of Whitney Street and Avondale Road around 10:30 p.m. Tuesday and through the night.

When one resident looked out their window they saw a uniformed officer camped on their deck armed with a sniper rifle.

"We went to go look out on the porch and the sniper was already there in our porch and we had not been given a knock on the door or anything to let us know he was out there," said Jeff Brennan in a statement sent to CTV London.

When asked when and how residents are alerted to situations London police say that occupants will either be evacuated or advised where to stay in their homes depending on the situation.

"In the incident last night (Tuesday) there was no imminent danger to anyone in the neighbourhood. For this reason, resources were used exclusively for the safe resolution of this matter, which did occur," said an LPS statement sent to CTV London.

Woodstock police say two wanted males were arrested at an Avondale Road residence in connection with multiple incidents in that city over the past two months.

Insp. Marci Shelton with Woodstock police said in a press release, “Investigations sometimes lead us into different jurisdictions and we appreciate the service that the London Police Service was able to provide to us.”

In addition to the two males arrested in London, a third male was also charged in the investigation. All three are facing weapons-related counts.

Woodstock police conducted a search of the residence following the arrests and say the investigation is ongoing but no further details are being released at this time.

- With files from CTV London's Amanda Taccone and Reta Ismail.