Dozen new cases of COVID-19 across the region, including London 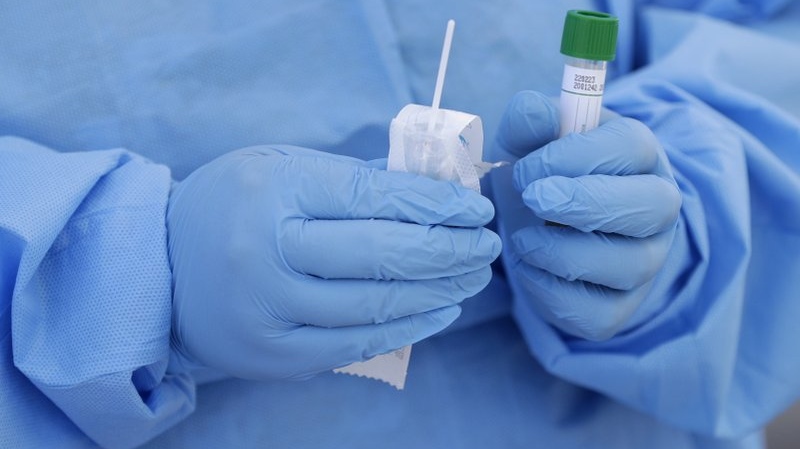 FILE - In this March 20, 2020, file photo, a health care worker prepares to collect a sample to test for COVID-19 at a drive-thru testing site in Miami. (AP Photo/Wilfredo Lee, File)

LONDON, ONT. -- Ontario's Ministry of Health is reporting four new COVID-19 cases in London-Middlesex and two new cases in Oxford County, as well as several others in the region.

The four new cases disclosed by the province Thursday morning in London-Middlesex include:

Three of the cases were likely previously reported by the Middlesex-London Health Unit (MLHU), which puts the total number of cases in the region at 20 as of noon Thursday.

Two new cases were reportedby the province in Oxford County, a man and woman, both in their 30s who got the virus from close contact and are both self-isolating.

Southwestern Public Health says the total for Elgin and Oxford counties is at four cases as of Thursday afternoon.

Lambton County saw the biggest recent jump in cases. The province on Thursday confirmed five cases of COVID-19 in the region initially reported Wednesday, all of whom are seniors with pre-existing condition with no recent travel.

All have been hospitalized. A man in his 70s was affected by close contact, while no explanation for exposure was given for the others, two women, one in her 60s, another in her 70s, and two males in their 80s.

Meanwhile in Grey-Bruce, the province reported one new case in a person in their 50s who had close contact with someone with the virus.

Then Thursday afternoon, the Grey-Bruce Health Unit reported an additional case, a woman in her 60s who had travelled outside the province and is now self-isolating.

The health unit says that brings the total number of cases in Grey and Bruce counties to six.

Across the province, 170 new COVID-19 cases were reported Thursday, bringing the provincial total to 858.

Thursday marked the largest single-day spike in cases by far.

At least 12 of the new cases are hospitalized, including two people in their 20s.

The total number of cases includes 13 people who have died and eight cases that have fully resolved.

- With files from The Canadian Press.

Why do some people exposed to coronavirus get sick and others don't?

Doctors are finding creative ways to treat patients with COVID-19

Abortion access will be maintained across Canada amid COVID-19 outbreak

When will Canada pass the peak of COVID-19? Even the experts don't know

'No Canadian' trends after Donald Trump floats idea of U.S. troops at border during COVID-19 pandemic

Emergency benefits: What each province is offering during the COVID-19 pandemic

Woman intentionally coughed on US$35,000 in food at grocery store: Pa. police

Number of COVID-19-related deaths in Ontario rises to 15