Firefighters from Goderich and Clinton battled a blaze in a building on Goderich's North Street early Thursday.

Crews were called to the scene around 2 a.m. and found the building engulfed in flames.

The building, which once housed the Chamber of Commerce, was so extensively damaged it had to be demolished, but fortunately there were no injuries.

The lone tenant living upstairs was able to escape safely, but he reportedly did so just in time.

Officials say the work of firefighters and a foot-thick fire wall stopped the blaze from spreading to other buildings.

In fact, it’s the second time that very firewall has stopped a fire from spreading.

Ten years ago the Triangle Discount Store burned to the ground, and at that time, the firewall of that building stopped flames from entering the Chamber of Commerce building.

Now rebuilt, the firewall stopped the fire in the Chamber building from spreading to the former Triangle Discount building.

Goderich Fire Chief Steve Gardiner says the cause of the fire will go down as undetermined because they can’t find the source of the fire now that the building has been demolished.

All businesses in downtown Goderich near the fire were open as usual by noon on Thursday.

No estimate of the damage has been released. 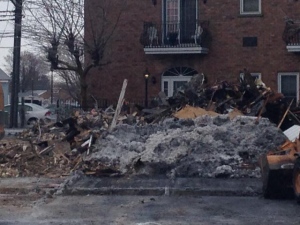