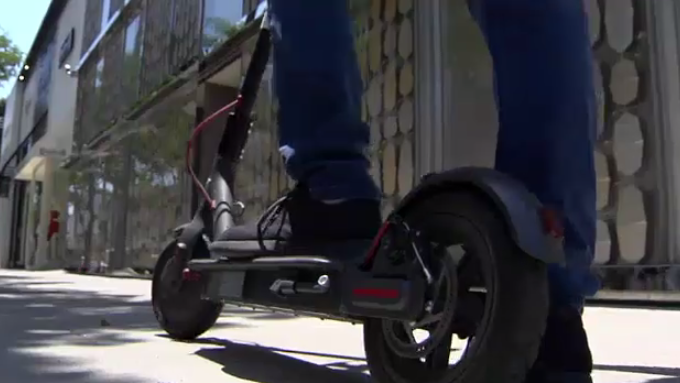 Earlier this week the provincial Ministry of Transportation floated the idea of legalizing e-scooters and allowing them to be driven anywhere a bicycle can operate.

The two-wheeled motorized vehicles are currently illegal to operate anywhere other than private property. The government's current proposal states that the scooters currently fall short of existing federal and safety regulations.

The government initially offered the public 48 hours in which to weigh in on the proposal, but later extended the deadline to Sept. 12.

Accessibility advocates said the extension still doesn't allow enough time for meaningful public feedback on a plan that poses risks to the disabled and non-disabled alike.

"These scooters are motor vehicles driven in a public space by someone who is not licensed, they don't have a licence plate and are not insured," said David Lepofsky, a longtime advocate and chair of the Accessibility for Ontarians with Disabilities Act Alliance. "This presents a safety issue for the entire public."

The government sets out a series of rules for the proposed pilot but does not provide a potential start date.

Prospective rules for drivers include a minimum age of 16 and a ban on carrying passengers.

The e-scooters cannot exceed a maximum operating speed of 32 kilometres per hour, the proposal said. They must also have a horn or bell, front and back lights, and cannot weigh more than 45 kilograms.

The government said its proposal would allow for feasibility studies that promote road safety on "environmentally friendly vehicles" while also "fostering business innovation."

"This will allow the ministry to ensure e-scooters can be safely integrated with other road users before a final, permanent, regulatory decision is made," the government plan said.

Posted quietly on the province's regulatory registry on Wednesday, the consultation period was initially set to close two days later just ahead of the Labour Day long weekend.

Transportation Minister Caroline Mulroney took to social media late Thursday to announce the consultation had been extended to Sept. 12 and apologized for the confusion.

Lepofsky said even the extension does not allow enough time to gather meaningful feedback, noting most public consultation periods tend to last for at least a month. He said the government should withdraw its proposal, begin comprehensive research and release it to the public when its done.

Lui Greco, a spokesman for the CNIB Foundation, which advocates for the blind or people living with vision loss, said that organization was relieved when Mulroney announced the extended consultation period.

The rules spelled out in the government's proposal don't take into account the potential for the vehicles to be improperly driven on sidewalks, he said, calling such misuse inevitable and noting it poses particular risks for the blind.

"If you're a person with poor or no sight and something comes at you at 32 kilometres an hour on the sidewalk, how quickly are you going to be able to react?" he said.

Greco said some North American cities have legalized e-scooter sharing services and urged the province to consult with those municipalities before proceeding any further. In some of those cities the e-scooters are being abandoned in the middle of the sidewalk when they run out of fuel, creating tripping hazards for the visually impaired, he said.

"It's a mess," Greco said. "In some U.S. cities they have declared outright bans because the scooters are litter."

Bird Canada, an e-scooter sharing company that currently operates in Alberta and is lobbying the Ontario government to legalize the vehicles, said safety is a priority. CEO Stewart Lyons said his company has been holding information sessions for its Calgary riders to offer guidance on how to use the scooters safely.

"Concerns around scooter safety are, for the most part, not based on fact or evidence," Lyons said in a statement.