Three large green planter boxes are intended to block the east and west entrances to the flex street, in an attempt to reduce traffic, and make Dundas Place a safer cycling route through the downtown.

While some drivers obeyed the recently installed no-entrance signs, a steady stream of cars were simply driven around the diversion.

“I think it’s as safe as it’s going to be, so there is no point adjusting anything,” lamented downtown resident Andrew Jackson who noticed little change in traffic levels.

City Hall made the changes in response to the removal of the King Street bike lane when construction began on the Bus Rapid Transit (BRT) system.

The temporary plan is to block vehicles accessing Dundas Place at Wellington and Ridout streets, but maintain access from Talbot, Clarence and Richmond streets. 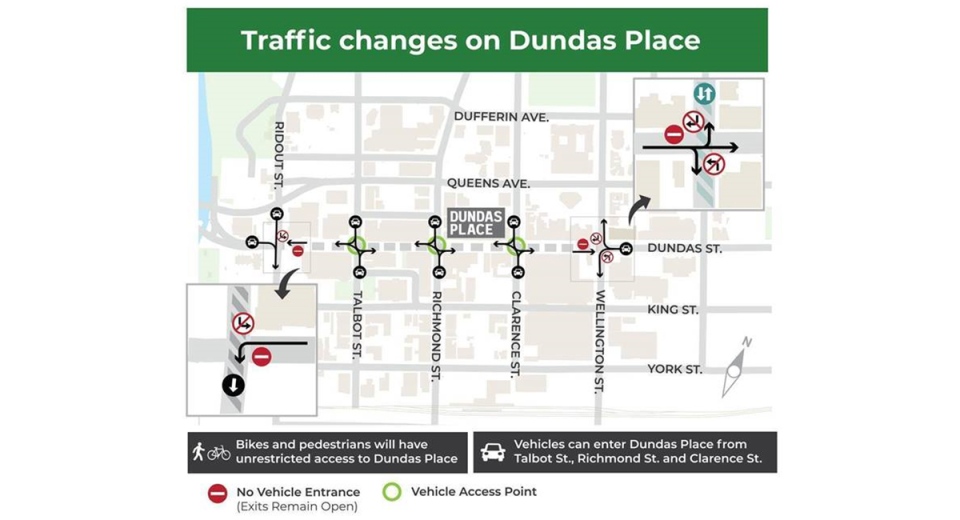 As drivers continued to bypass the barriers, however, traffic levels remained high enough to keep many cyclists on the sidewalk.

Painted bike lanes were recommended by city engineers earlier this year, but ultimately rejected by city council when some cyclists and merchants objected.

Instead, council backed the traffic diversion model, in part because a letter from Downtown London supported the measure.

It may take drivers more time to start following the diversion, and the owner of Coffee Culture worries it may also divert his customers.

“It’s a pain,” explains Shane Kenneth. “You have basically told people in vehicles they are not really welcome downtown.”

The diversion is scheduled to be in place for eight months.