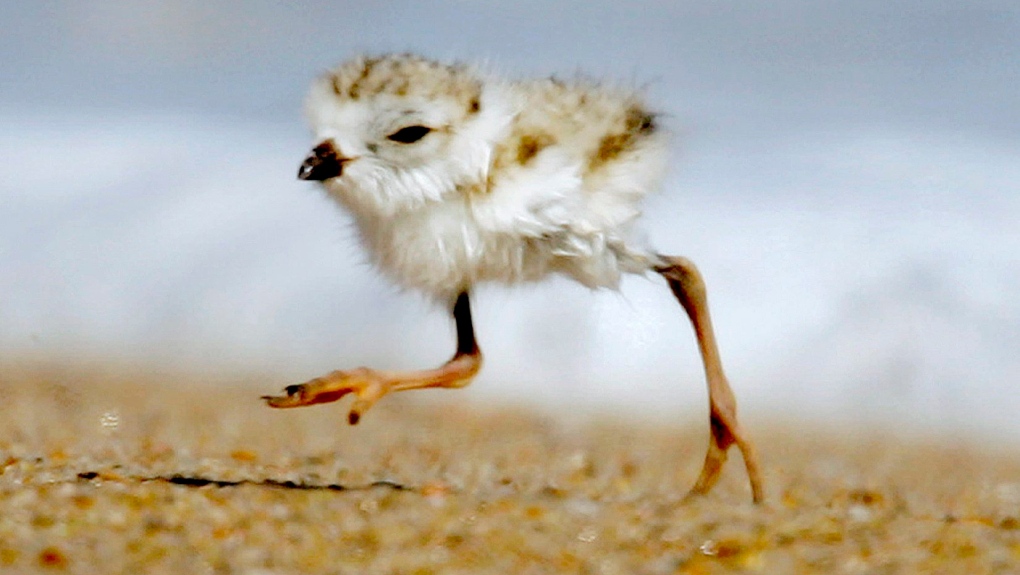 A two-day-old piping plover runs along a beach just ahead of waves lapping on the shore in the Quonochontaug Conservation Area in Westerly, R.I., Thursday, July 12, 2007. (AP / Steven Senne)

WINGHAM, ONT. -- The Town of South Bruce Peninsula has been ordered to pay a $100,000 fine for damaging the habitat of the endangered piping plover.

The tiny bird has been nesting on the sands of Sauble Beach, Ont. for the past 10 years.

Court heard that in 2017, the town conducted beach maintenance along Sauble Beach, raking and bulldozing part of the beach and nearby dunes where piping plovers had been nesting.

In 2018, they were charged by Ontario's Ministry of Natural Resources under the Endangered Species Act with destroying piping plover habitat.

In Oct. 2019, following a short trial, a Justice of the Peace decided the town did violate the act, and found them guilty.

Their sentence, a $100,000 fine, was accepted by the court last week. It was a joint submission from the Crown and defence, payable to Birds Canada.

“We vehemently deny we destroyed piping plover habitat, and we hope the appellate judge will concur,” she says via a Facebook post.

It’s expected the town’s piping plover appeal will be heard in early 2020.

Jackson says the municipality will use some of the $180,000 in Sauble Beach parking revenue from 2019 to pay for the appeal and/or fine.