Roughly 200 people gathered at the march's peak, thought it started smaller at the gates of Victoria Park early Friday afternoon.

The protest shut down Richmond Street at the railway tracks between Oxford Street and Pall Mall Street, before gathering steam and moving to block the tracks on Waterloo Street at Pall Mall.

London police had asked drivers to avoid the area and expect delays through the downtown.

It was a a peaceful demonstration, involving both Indigenous and non-Indigenous protesters, and was watched closely by both London police and CN Rail police.

The march, hosted by Idle No More London, was described as a “short walk” scheduled to last from 2 p.m. until 6 p.m. that would “block the rails in London, Ont.” 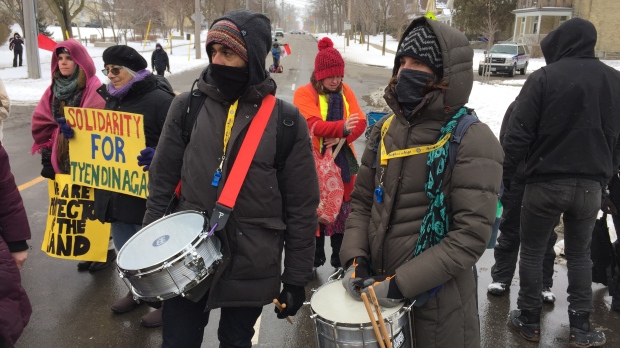 The demonstration was in part in protest of provincial police breaking up the Tyendinaga blockade earlier this week, which was in solidarity with the Wet’suwet’en hereditary chiefs.

The Wet’suwet’en hereditary chiefs in northern B.C. oppose a natural gas pipeline project in their territory and demonstrations have been ongoing across the country.

Ten people were charged when the OPP moved in the blockade in Ontario on Monday.

The protest in London comes on the second day of talks with the chiefs in northern B.C.