LONDON, ONT. -- London's Jewish community is celebrating the demolition of a home many thought of as a symbol of hate.

The infamous so-called 'Nazi house' just west of Hyde Park is being torn down.

For Rabbi Catharine Clarke of the Shalom on Huron Street, it’s a long time coming.

“Today is a very important Jewish holiday called Purim where we celebrate a victory over hatred from 2,500 years ago. So my first thought is it's a shame that people keep trying to perpetuate hate and make it a force in their lives. But I'm glad that the house is being demolished so that we can have a fresh start from there.”

The home was built 50 years ago by original owner, and self-proclaimed Nazi, Martin Weiche, to resemble one of Adolf Hitler's retreats. It was given the name The Berghof. Weiche died in 2011.

The home has since been popular with those interested in documenting abandoned buildings.

“He obviously had no use for anyone who wasn't Aryan,” recalled former CFPL-TV news director George Clark.

It was Good Friday of 1973 when Clark, a young reporter at the time, was invited by Weiche himself to a party at the house to celebrate Hitler’s birthday.

He remembers about 30 to 40 people in attendance, including Ku Klux Klan members, Hells Angels and other Nazi supporters.

He said those in attendance celebrated by burning a 20-foot high swastika.

“Oh I was astounded that that existed in London and we knew nothing of it. And this was before we had calls from neighbours about burning items there. But this was my first knowledge that such a place existed. And it was on the edge of the city. Hyde Park's a quiet little community. You don't really expect that.” 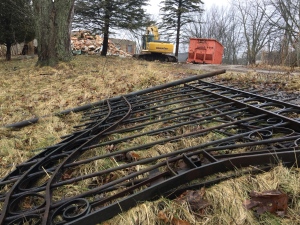