London police are investigating after a three-vehicle crash flipped a Voyageur van onto its side leaving passengers trapped.

Emergency crews responded to the northbound lanes of Highbury Avenue, between Bradley Avenue and Commissioners Road shortly after noon on Wednesday.

There were five people in the Voyageur van, (believed to be two employees and three passengers), one person in a pickup truck and two people in a minivan.

All five people in the Voyageur van were taken to hospital, and police say at least one person is in critical condition.

The northbound lanes of Highbury were closed north of Highway 401 for most of the afternoon as the Traffic Management Reconstruction Unit investigated. 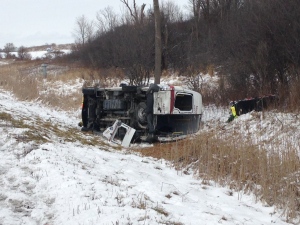