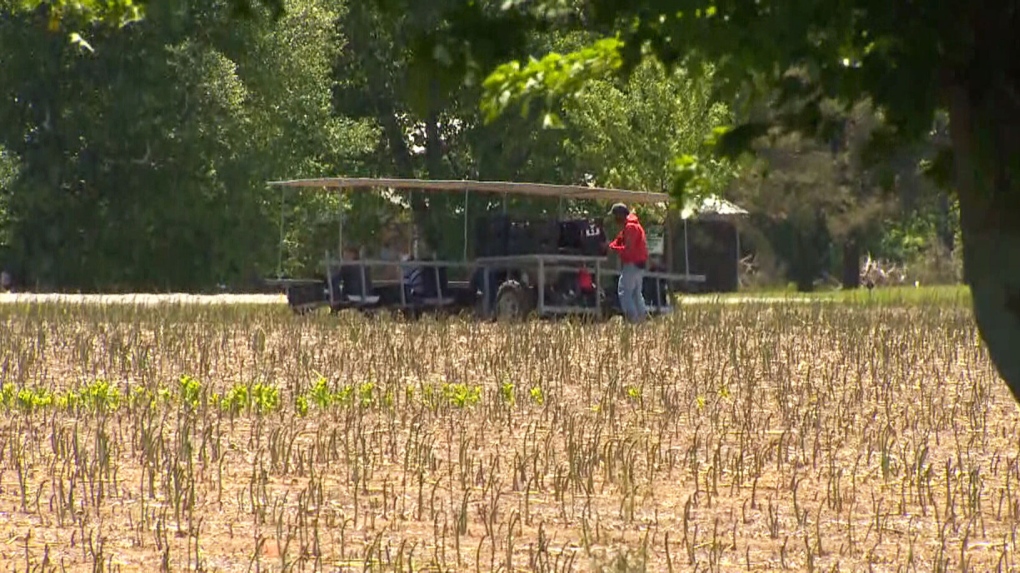 Of the 216 migrant workers at Scotlynn Group's farm in Norfolk County, Ont., 164 have tested positive for COVID-19.

LONDON, ONT. -- One hundred and nineteen migrant workers are being housed in Brantford, Ont. hotels for a 14-day isolation period after a COVID-19 outbreak in Norfolk County.

"We ensured everything from transportation to how they got to their rooms,” says Norfolk County CAO Jason Burgess. "They wore masks, they are monitored by a daily basis and we are supplying Spanish translators for these workers."

Burgess says they have extensive checklists in place, as far down as how to evacuate the hotel and how to manage the workers if there is a fire.

Dr. Elizabeth Urbantke, acting medical officer of health for the Brant County Health Unit (BCHU) says hotel staff were briefed by Haldimand-Norfolk Health Unit (HNHU) personnel and were given instructions on procedures to avoid contact with these guests and how to safely discard of garbage and linens.

She adds all rooms will be professionally disinfected after the guests have left.

"HNHU staff will conduct daily wellness checks and the workers have been given contact information if any issues arise," says Urbantke.

"The workers have all been swabbed and clinically assessed and are either asymptomatic or minimally symptomatic," while some are there because they are required to isolate due to close contact.

Despite all the precautions, local politicians are not happy that they were left out of the loop.

Brantford Mayor Kevin Davis didn't learn that the health units had moved the workers to his city until after many of them had arrived Sunday.

"I am all about helping neighbours, but if I want my neighbour to help me, I'd ask them," says Davis.

"That allows that neighbour to best prepare, and in this case it makes sure that what is in place is designed to limit and prevent the spread of virus in this community. That's why I'm so disappointed."

Brantford-Brant MPP Will Bouma says he still hasn't had communication from the BCHU or the HNHU.

"What disturbs me is that you are taking 120 people who have tested positive from an isolated, rural setting and moving them into the middle of a city of 100,000 without talking to anyone about it, without letting anyone know," says Bouma.

He adds that with just 10 COVID-19 beds in the community, they have limited resources.

"If 10 per cent of the120 people that we're housing right now were to need hospitalization, that would overwhelm our system."

Bouma is so upset by the lack of communication that he plans on taking his concerns to Ontario's top doctor.

"I'm asking for an investigation from the chief medical officer of health (Dr. David Williams) into the actions of the local health units so we can find out exactly what happened and why."

The Migrant Workers Alliance for Change (MWAC) has spoken to the workers, who say they are scared, and confused. However, MWAC feels the current situation is better than bunkhouses.

"I think hotels are okay, as long as they have the basic needs; food, able to communicate," says Sonia Aviles of MWAC.

"I think that's a good option, but again this all could have been avoided."

Scott Biddle, Scotlynn Group Farms president, tells CTV News he is covering the cost of the hotels and continuing to pay wages.

Ontario Premier Doug Ford said in his daily briefing Wednesday that after the spike in positive cases, his government immediately sent 137 inspectors to Ontario farms.

"We've given them over $2 million for [personal protective equipment] and to make sure they aren’t going into congregant living environments," says Ford.

He says his government is working hard to ensure the workers are protected.

"I love those farmers, they work their backs off and we want to make sure they have a safe working environment."

Burgess says the reason they had to move the workers to the adjacent county was due to insufficient hotel rooms to house them in Norfolk County.

"We are the largest user of the Temporary Foreign Worker Program in Ontario," says Burgess.

"Some of the rooms are also booked with construction workers. [Biddle] would have preferred to have them closer, but that was best available location."

Burgess says that Biddle had used that hotel before to house his workers, and ultimately it's his decision because the farmer pays for it.

'This is a public record': These are the pandemic moments Canadians are documenting

Will COVID-19 make big weddings a thing of the past? Industry experts say no

Is the pandemic an 'act of God'? Legally, it depends