COVID-19: More cases than ever reported in London region 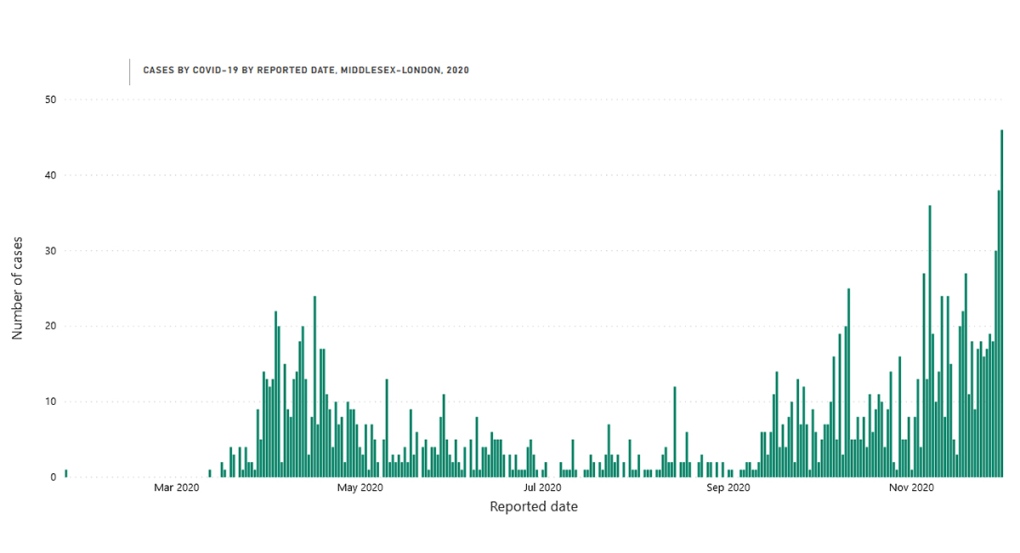 The daily number of cases by reported date are seen in this graph from the Middlesex-London Health Unit on Wednesday, Dec. 2, 2020.

MIDDLESEX CENTRE, ONT. -- For the second day in a row, the London region has set a new record for daily COVID-19 cases, with the Middlesex-London Health Unit (MLHU) reporting 46 new infections Wednesday.

The health unit is also reporting four new deaths, though one was reported Tuesday that hadn’t yet been included in the official totals. They include a man and woman, both in their 70s, a man in his 80s and a woman in her 90s.

The previous single-day record, set on Tuesday, was 38 cases. Prior to that, 36 cases was the highest total, reported on Nov. 8.

Ongoing outbreaks in six units at the London Health Sciences Centre’s (LHSC) University Hospital have been a significant contributor to the case counts in London in recent days.

Health unit officials say that, cumulatively, there have been a total of 97 cases - 47 staff and 50 patients – linked directly to the outbreak, as well as additional cases among close contacts.

Right now, LHSC is reporting 45 patients (including five in critical care) and 44 staff are actively positive for COVID-19.

The outbreaks are also linked to three of Wednesday’s reported deaths, bringing the total number of connected deaths to nine.

London Mayor Ed Holder released a statement Wednesday on the outbreak, expressing his condolences and support for health-care workers.

"We honour the lives of your loved ones, and we pray that their memories bring you peace, comfort, and strength during this time of great sorrow...I am incredibly saddened, and frustrated by what has transpired."

Please find below my statement on the #COVID19 outbreak at University Hospital. #LdnOnt pic.twitter.com/bTtuEfGzsd

There are also ongoing outbreaks in one unit at the Parkwood Institute, a kindergarten class at St. Marguerite d’Youville Catholic School and two Western University residences.

At the current daily case count level, the health unit says it is likely that the region will be moved from yellow-protect to orange-restrict under the province’s COVID-19 framework.

Health officials are also asking people and businesses to avoid social gatherings this holiday season, and that events be held virtually, to avoid super-spreader events.

Meanwhile university and college students preparing to head home for the holidays are also encouraged to voluntarily self-isolate 14 days prior to departure and to limit contacts 14 days after their return to avoid spreading the virus.

One new death was reported by Southwestern Public Health on Wednesday.

Ontario is reporting a spike in deaths, with 35 more, and more than 1,700 new cases for a sixth straight day.

Feds given narrower recommendations for who should be vaccinated first

Retailers feel the pinch as pre-holiday restrictions eat into sales

Alberta to roll out COVID-19 vaccine in 3 phases; seniors, frontline workers to get it first

What does the Pfizer vaccine approval in the U.K. mean for Canada?

Retailers feel the pinch as pre-holiday restrictions eat into sales

Britain OKs Pfizer vaccine and will begin shots within days

From allergies to mercury misinformation: Your COVID-19 vaccine questions answered

COVID-19 can linger on some surfaces. What does that mean for gift giving this holiday season?

They had only heard about COVID-19. Then they returned to society to see its full impact