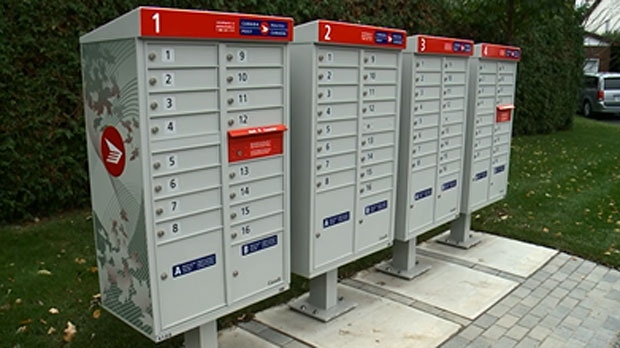 HAMILTON -- Local governments should have a say in the placement of large community mailboxes even if federal law states they can go on municipal property, a lawyer for a southern Ontario city argued in court Wednesday.

Canada Post and the City of Hamilton are locking horns over a local bylaw that requires Canada Post to obtain a $200 permit per site to install the mailboxes on municipal land.

The Crown corporation argues the bylaw infringes on federal rules that grant Canada Post final say over the location of mail receptacles.

It also says Hamilton officials had the chance to weigh in on where the mailboxes would go but chose not to engage.

The city's lawyer told a Hamilton court the dispute isn't about wresting control away from Canada Post, but about ensuring the city has a role to play, which she called "a question of national importance."

The bylaw was put in place to formalize the consultation process and set out specific criteria with which to review the proposed sites, Justyna Hidalgo said.

"The city isn't choosing a location, it's just confirming the location chosen by Canada Post," she said.

The judge overseeing the case called it a matter of "semantics" and questioned whether it was necessary to create an additional layer of bureaucracy when informal consultations have worked in the past.

"Canada Post isn't saying the city doesn't have a role to play," though it may just be a supporting role, Judge Alan Whitten said.

But Hidalgo argued the approval process must be centralized to make sure the mailboxes don't conflict with existing infrastructure and permits.

In the past, the super mailboxes have only been installed in new developments, and the city was involved in choosing the location, she said.

Adding the boxes to established neighbourhoods -- with their own traffic patterns, street lights and trees -- creates "additional levels of intricacy and complications that need to be assessed" in order to protect residents' interests, she said.

She admitted, however, that the city hasn't reviewed the hundreds of locations submitted by Canada Post and thus doesn't know whether they meet the standards laid out in the bylaw. The sites haven't been evaluated because Canada Post refused to submit to the permit process, she said.

Canada Post is in the process of installing the super mailboxes as it discontinues home mail delivery, a move it says is necessary to its financial survival as more Canadians switch to electronic means of communication.

The move has sparked a lawsuit from a union representing postal workers that wants the Federal Court to declare the cancellation of home delivery unconstitutional.

A group of Montreal-area mayors have said they hope to join that action and have accused Canada Post of ignoring their concerns.

The Hamilton judge suggested Wednesday that city officials may have enacted the bylaw to oppose the cancellation of home delivery.

Their lawyer denied it, saying officials recognize it's not in their power and simply want to regulate where the boxes can go.

The case could have broad implications as similar situations arise in other Canadian municipalities.