An Ailsa Craig-area couple has beat out 30 others in a contest to be married on a parade float during the village’s upcoming Santa Claus Parade.

The application of Katie Nigh and Trevor Vanderloo was selected, above all others, based on their personal story.

The pair met through a mutual babysitter a few years after personal tragedies.

"We met at a time in the hardest time in both of our lives and we feel so blessed to have found each other," read the contest submission from the couple.

For Katie, it was the loss of her partner.

“I lost Adam, my first husband to brain cancer. And I never thought I would get married again,” she told CTV News.

But after starting a friendship with Trevor, a relationship blossomed. The couple has now blended their children to make a family of five.

“This was not what I expected but it’s been pretty awesome,” she added.

Trevor, who comes to the marriage with a sense of humour, is thrilled to be tying the knot for the first time.

“I never thought anyone would want to marry me”, he said with a laugh. “So this is pretty awesome. This is a home run for ole’ Trevie!”

A home run that will be witnessed by anyone attending the Ailsa Craig Santa Claus parade on Saturday, Dec. 10. 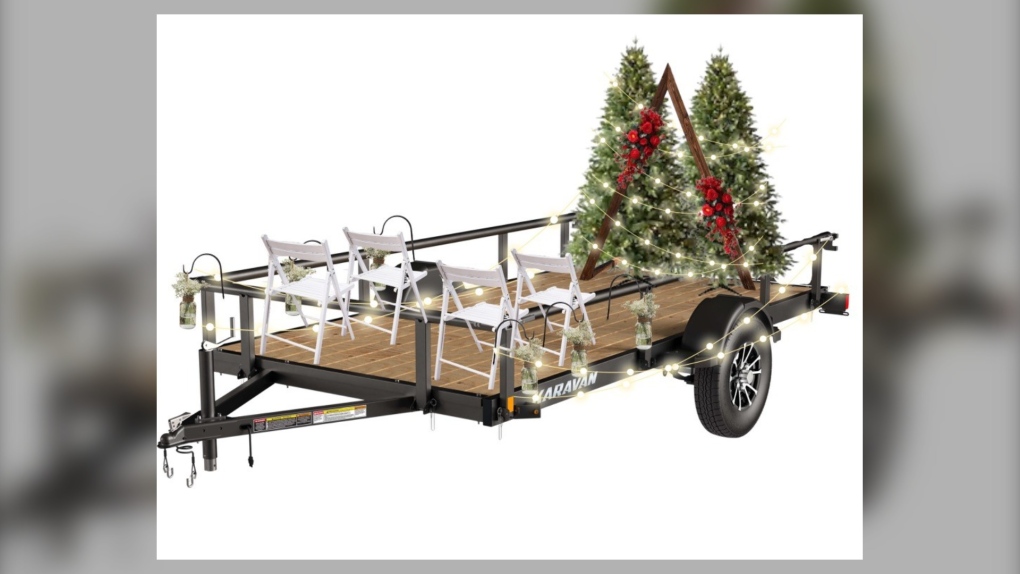 An early artist rending of the wedding float that has since been expanded to accommodate more people. (Source: Tessa De Almeida) The wedding party will travel down Main Street and in a change of plans, the couple will complete their vows before the parade turns towards the community centre.

The unique wedding contest is the brainchild of Sapphire and Lily, an event planning company.

“It came off very much as a Hallmark Christmas movie. Our couple has gone through some tragedy in their lives and found love. That was just touching,” she said.

Initially, the contest included only the float and an officiant to confirm the vows.

But since the original story was broadcast on CTV News London, more services have come on board. De Almeida said a hairstylist, florist, decorator and even a hall have been donated.

“Friends of the old town hall contacted within the hour of the news and said, ‘Hey, we’re willing to offer the space to the couple if they want to have a reception.’ ”

Katie and Trevor have gratefully taken up all the offers while acknowledging the parade wedding is a switch from their original plan to elope to a warm and sunny Caribbean island.

“I love the idea of getting married at Christmas time” Katie said. “Having the kids with us and the memories it will create for them, it’s something we couldn’t do any other way.”

And while the kids will surely be watching the nuptials most of the time, Katie and Trevor acknowledge a jolly guy in red, also in the parade, just might grab more attention.

“Well, we don’t want to steal the show from Santa, but if we have to, we have to!” Trevor concluded with a laugh.

BREAKING | B.C. reveals plan for decriminalization of small amounts of drugs for personal use

British Columbia is taking a major step forward in its fight against the province’s deadly overdose crisis by decriminalizing the possession of a small amount of certain illicit drugs for personal use.

Adding milk to coffee may be anti-inflammatory: Danish study