'Could it have been worse? Absolutely': Seven injured in Old East Village explosion

An explosion in Old East Village had residents rushing from their homes late Wednesday night in a chaotic scene that ultimately saw a number of homes destroyed or damaged.

Ultimately 12 people, including first responders were assessed on scene for injuries, with seven people being transported to hospital. Of those seven, one is a civilian, four are firefighters and two are police officers.

A firefighter remains in stable but serious condition. The rest of the injured were treated and released having sustained only minor injuries.

“Could it have been worse? Absolutely, “said Mayor Ed Holder at a press conference, “because of the great efforts of our first responders I think that helped avoid more injuries.”

“This was a significant explosion and I find it amazing that literally there was no people that were actually hurt other than our first responders," said Acting Deputy Fire Chief Jack Burt.

It all began when police received a call regarding a car crashing into 450 Woodman Avenue at 10:37 p.m.

Police attended the scene and immediately recognized that a gas line had been ruptured. Police began evacuating the neighbourhood with several people already heading out on their own.

The house exploded around 10:50 p.m. Officials say no one was home at the time.

Up to 12 houses have been affected, with several being severely damaged and one levelled. Fire officials say seven of the homes were affected by fire. All of the fires were brought under control however the losses are believed to be significant.

At its peak, upwards of 50 firefighters were battling the blazes overnight. "In my career I have not seen an explosion of that magnitude," said Burt.

Building division officials have been brought in to determine the structural integrity of the affected homes before letting residents back in. Officials could not guarantee that all displaced residents would be back in within 24 hours.

Police evacuated about 100 homes in an area bordered east and west by Quebec and Charlotte streets, and north and south by Lorne Avenue and Dundas Street.

As of Thursday night all but 12 houses were cleared for residents to return home.

This is an active incident. We ask the public avoid the area at this time. Updates will be provided as the situation progresses.@ldnontmayor l @LdnOntFire l @lpsmediaoffice#LdnOnt l #OEVldn pic.twitter.com/JPmweStJor

In the immediate aftermath the City of London set up a receiving area for those evacuated at Carling Heights Community Centre, and accommodations were found for all those affected.

The Ontario Fire Marshal's Office was expected to arrive Thursday to assist in the investigation.

The 23-year-old female driver from Kitchener, Ont. was arrested and has been charged with impaired driving and four counts of impaired driving causing bodily harm. She has since been released on bail and is scheduled to appear in court on September 4th.

Throughout the night reports of citizens pulling together were spreading on social media. From neighbours helping elderly neighbours leave their homes, to others providing shelter and food to those displaced.

“We wish full and speedy recoveries to all who were injured, I would like to acknowledge the citizens in the area for evacuating so quickly…and for providing care and comfort for those affected,” says Holder.

Police are expected to remain on scene through Thursday night to keep watch on the vacant homes of those residents who remain displaced.

More shocking aftermath on Woodward & Charlotte Aves seen from a backyard on Charlotte also with extensive damage. We are so grateful to have such amazing partners in emergency services & in the community. Thank you to all for your care, concern & support. #community #OEV #ldnont pic.twitter.com/kvl8e7vLFG

-- With files from Daryl Newcombe and Tamara Heisel 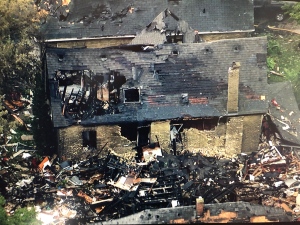