LONDON, ONT. -- Rising temperatures combined with expected rainfall and snow melt has local conservation authorities urging the public to stay away from bodies of water and frozen ponds.

"There is a lot of people out and about and they don't realize that the ice will not be safe," says Teresa Hollingsworth, Upper Thames River Conservation Authority manager of community and corporate services.

"Banks are slippery. Snow is deep and they don't see the danger. Things are going to start moving over the next couple weeks."

The weekend weather forecast is for 5-10 mm of rain, with temperatures reaching the high single digits during the day, and dropping below freezing overnight.

"Higher temperatures along with snow melt and rain in forecast can cause a spring run-off event," says Jennifer Dow, water conservation supervisor for the Kettle Creek Conservation Authority (KCCA).

Photos taken Friday by the Municipality of Central Elgin show the ice in the Port Stanley, Ont. harbour beginning to break. There is open water downstream which should prevent an ice jam, but the water is unpredictable. 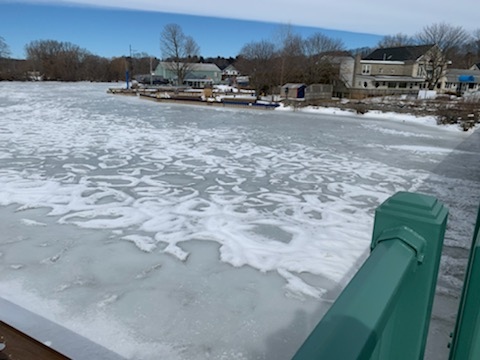 "There is still a big chunk of ice upstream of the lift-bridge so that has to go somewhere," adds Dow.

"Fast moving water and breaking ice can be an attraction to the public. However, be aware that banks are extremely slippery and the water is very cold at this time of year."

KCCA is also asking property owners to keep personal property away from low-lying areas and to clear storm drains of ice and snow.

The City of London joined the area's conservation authorities in putting out a notice of weakened and unstable ice. They are asking parents to keep children and pets away from all watercourses and frozen waterbodies.

"We've been watching conservation authorities where people have been hurt, and we don't want to have that happen in our watershed," says Hollingsworth.

"Be aware because although the snow is nice and white it's beginning to melt and can be very dangerous."