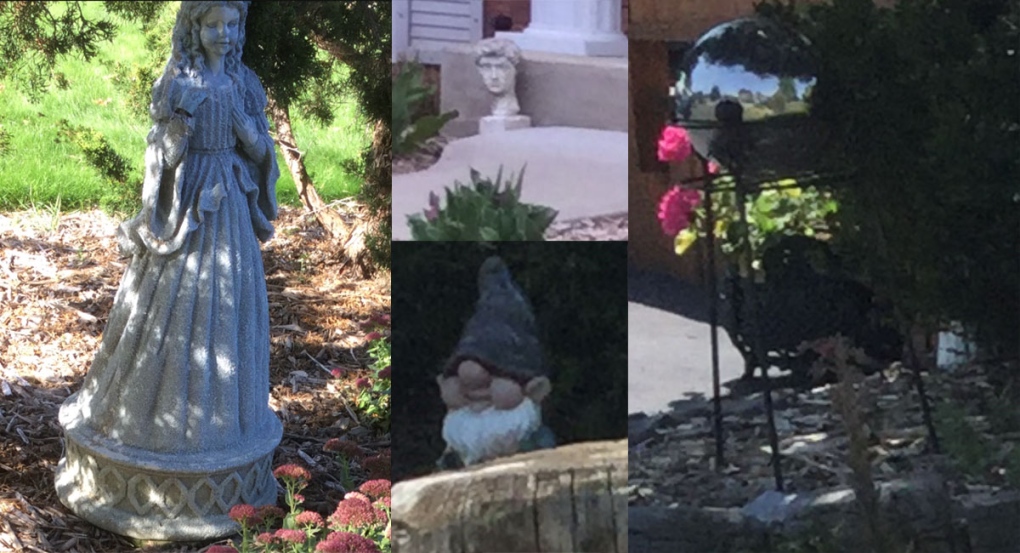 Garden ornaments stolen from a home Brant Street in Simcoe, Ont. are seen in these images released by Norfolk County OPP.

MIDDLESEX CENTRE, ONT. -- Norfolk County OPP are reporting four separate incidents in which garden ornaments -- some weighing as much as 200 pounds -- have been stolen in the past week.

The first incident is believed to have occurred between Oct. 18 and 20 at a home on Brant Street in Simcoe.

A number of items with "significant sentimental value" were removed from the home's garden, and the owner is pleading for their return.

They included a two-foot-tall cement angel, a garden gnome and a silver gazing ball on a metal stand.

Then in the early morning hours of Thursday, Oct. 21, OPP say a concrete bird bath was stolen from a home on Metcalfe Street North in Simcoe. The bird bath is described as having a sunflower on top and bunnies on the side.

Jumping ahead to Saturday morning, police were called to an address on Orchard Crescent in Waterford for another theft.

A 40-year-old cement bird bath, estimated to weigh about 150-200 pounds, was removed early that morning.

It is described as a grey, two-piece bird bath, about three feet tall with a scalloped bowl that was cracked and had been resealed with white sealant.

Also on Saturday, a 200-pound concrete hawk, and a dolly, were reportedly taken from a property on Cockshutt Road in Townsend.

OPP say the theft is also believed to have taken place in the early morning hours of Saturday.