INGERSOLL, ONT. -- It was a mystery that had Ingersoll dog owners worried, as a number of dogs were becoming sick, but the issue was soon connected to the town's dog park.

On Tuesday, Gea Scheurwater and her son Dylan, two, brought their six-year-old Boxer, Jarpi out to the Ingersoll Dog Park.

Scheurwater says it was clear what the problem was, "There was definitely people bringing food in from home and putting it in there and dogs were getting in it."

Scheurwater says compost cones intended only for dog waste were instead being used by people to dump kitchen waste.

The cones were put in by volunteers looking for an environmentally friendly way to get rid of dog droppings. 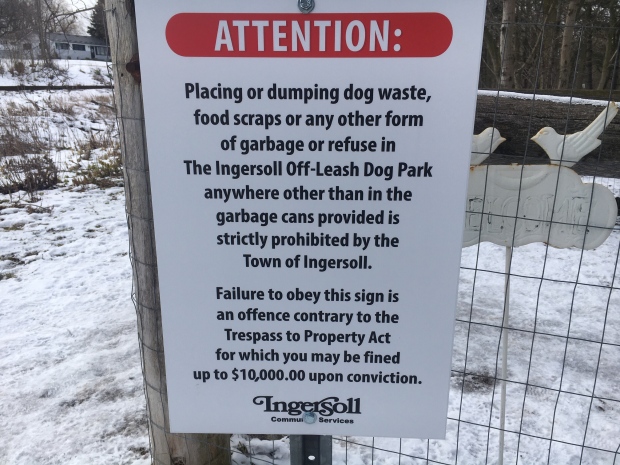 A sign displays some of the rules at the Ingersoll Dog Park in Ingersoll, Ont. on Tuesday, Jan. 28, 2020. (Gerry Dewan / CTV London)

Many dog parks, including those in Woodstock and London, use waste disposal systems from a company called Molok, bins place over holes in the ground that can collect the waste.

Woodstock dog owner Don Foreman isn't surprised dogs, with their strong sense of smell, were looking for treats in the kitchen waste, "Someone walks in here with a dog treat in their pocket and there's dogs following them. They know."

"Once we were aware that was happening we had no choice,” says Ingersoll’s Community Services Director Kyle Stefanovic. "We have now come into the park and done some remedial action to remove all of those compost bins and waste cache, so the park is safe."

Stefanovic says a new way to approach the dog waste will be put before town council in February.

"We should be able to narrow it down to a single option based on what other municipalities are doing to deal with their dog waste."

For now, dog owners are left with traditional garbage cans near the dog park entrances until a more sustainable solution is put in place.