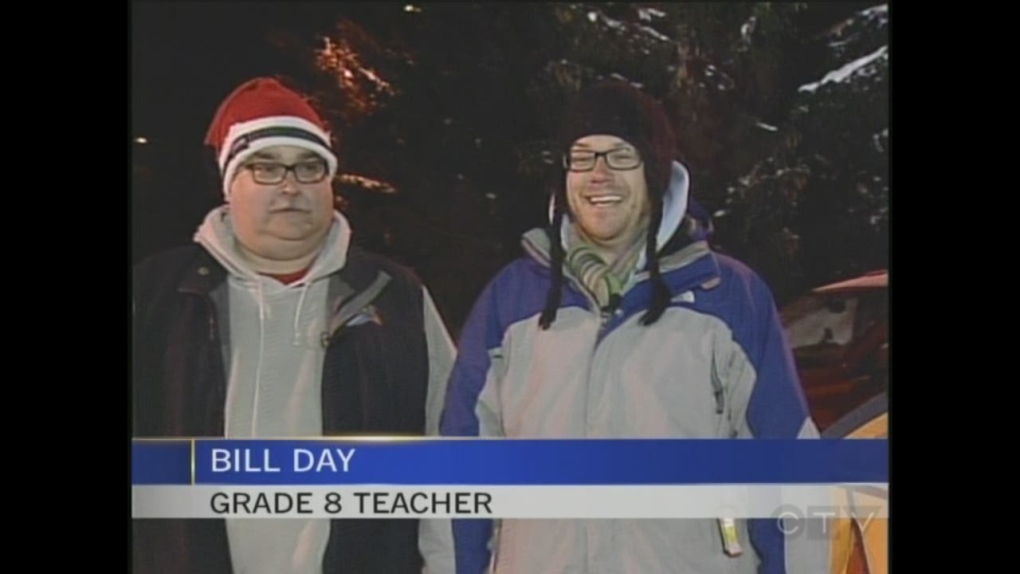 Andy Orr and Bill Day at Cleardale public school where they camped overnight on Nov. 28

Cleardale public school in London was all abuzz Friday after two staff members there spent a chilly night under the stars, by choice.

Vice-principal Andy Orr and Grade 8 teacher Bill Day thumbed their noses at the elements Thursday night and slept in a tent at the school after they made a promise to their pupils.

The pair agreed to camp out if the children could beat the mark of $2,500 raised for the Terry Fox Foundation.

That was amount the school collected last year.

After the pupils brought in $2,900, Orr and Day realized they’d have to spend the night outdoors on one of the coldest nights of the season.

“We talked and tossed and turned. It was so cold.”

Orr said he was up until midnight and then tried to get some sleep. At one point in the middle of the night, Day was outside and slipped, grabbing hold of the tent pole, which snapped.

That left them with a partially collapsed tent and sleep was pretty much out of the question. “It was quite entertaining,” Orr said.

The pair was up at 7 a.m. and Orr was making grilled cheese sandwiches Friday morning for some of the pupils.

“Our kids are buzzing with excitement,” he said. “It’s great to see our Cleardale community coming together.”

Orr said there are already plans in the works for next year’s campout.