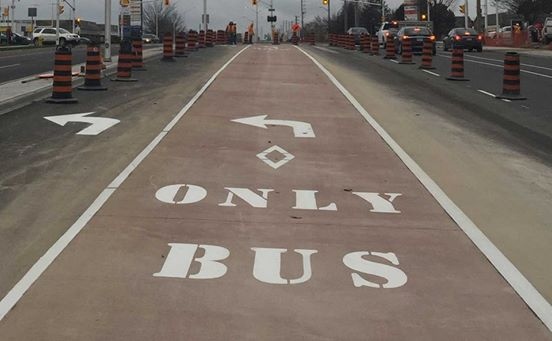 London’s first bus only lane is now in use.

The City is unveiling the lane at Sarnia Road and Wonderland Road Friday. The lane is designed to allow LTC buses priority when turning left at the westbound traffic signal.

The new lane is painted red and marked with white diamond symbols, indicating that the lane is for transit use only.

Once a bus is in the lane it will be detected by a sensor which will trigger a new “transit signal” to turn green and allow buses to proceed with other westbound traffic. The signal’s appearance is different from a typical traffic light; is situated lower and is black in colour.

The designated lane and signal will be in use for London Transit routes 10 and 29, which together carry 440 passengers on an hourly basis.

The lane is a first of many planned across the city in the next few years.