City hall finally provided a rationale why specific city parks were selected to be on a list where homeless encampments are proactively removed.

During this week’s meeting of the Community and Protective Services Committee, Coun. Sam Trosow pressed staff about a recent story by CTV News.

CTV News recently revealed that out of 546 municipal parks, city hall has a list of 15 where compassionate, but proactive tent removal occurs.

The remaining parks are only enforced on a complaint basis.

Except for Springbank Park, the parks on city hall’s proactive enforcement list are in core neighbourhoods including the downtown, Old East Village, and SOHO.

Those neighbourhoods also contain many agencies that offer services that unsheltered Londoners access.

Coun. Trosow asked if the location of the selected parks is motivating Londoners experiencing homelessness to choose riskier locations to set up their tents.

“We know that many people that are going to be coming for your services are in encampments, yet they are being pushed further into other neighbourhoods and dangerous situations,” Trosow said.

“Inability to set up encampments in those downtown parks should not impact people being able to access 24/7 overnight drop-in spaces, or daytime programming spaces as they are all located in the core area or very close to the core,” replied Dickins. 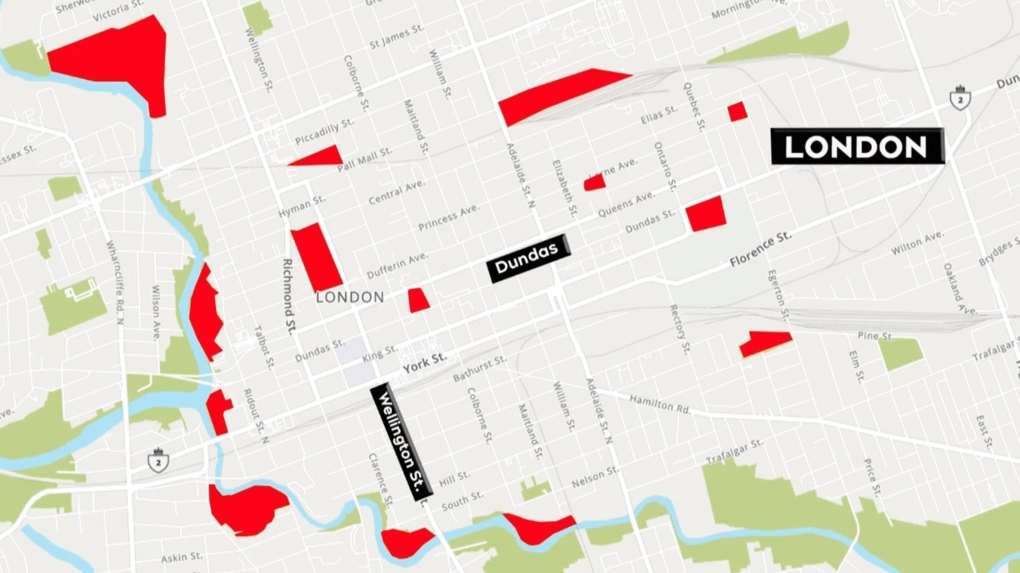 ‘We didn’t ask to be down here’

“I got stabbed in my face a couple times,” 33-year-old Michael says as he gently touches deep lacerations around his eye and down his cheek.

He barely survived a recent attack in the heavily wooded area where he shares a tent with his girlfriend.

Michael says encampments are being pushed from the core into more dangerous remote areas.

“Being pushed further and further back into darker areas like down here where we aren’t really seen,” he said.

“We’re being hidden away so it (homelessness) doesn’t seem like a problem.”

City staff and local agencies admit that the 400 spots in this year’s $5 million Winter Response to Homelessness won’t be enough to help everyone living unsheltered.

“To move them from one spot to another, that doesn’t help their mental health situation, so we have to come up with permanent solutions,” Coun. Pribil told CTV News.

He believes upcoming meetings involving all stakeholders will be crucial to finding permanent solutions.

“Accountability is the key. It really is,” he said. “We have to make sure we all stay on track. It doesn’t matter if it’s the city or the agencies.”

Gordo, 42, worries about having his tent moved by the city.

He understands Londoners don’t want him camping in parks— but he doesn’t want to be there either.

“We didn’t ask to be down here,” he said. “We’re just kind of stuck in this situation.”