The Vanier Cup is coming to the Forest City and Western University this November.

According to a press released issued Thursday, U SPORTS announced that the 57th Vanier Cup will be hosted at Western Alumni Stadium on Nov. 26, beginning at 1 p.m.

This will be the first U SPORTS football championship to be hosted in the City of London, and the seventh city overall to host the event since its inception in 1965.

“U SPORTS is thrilled to partner with the City of London, Tourism London and Western University to present this 57th edition of the Vanier Cup,” said Lisette Johnson-Stapley, U SPORTS chief sport officer.

According to the release, it will be only the second time that the defending Vanier Cup champions have the potential to uphold their crown on home turf, after the Western Mustangs won the 2021 championship against the Saskatchewan Huskies last December. 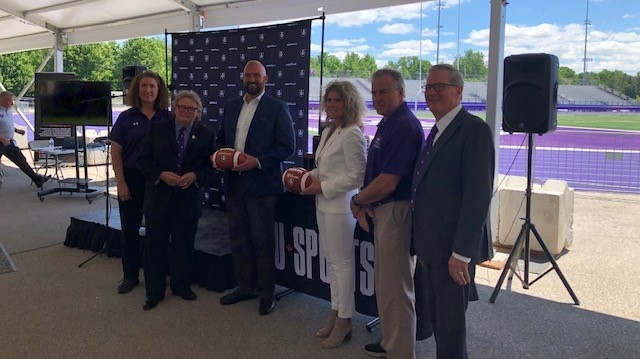 It was announced by U SPORTS on June 23, 2022 that the City of London and Western University will be hosting the Vanier Cup on November 26, 2022. (Nick Paparella/CTV News London)

“London and Western offer the participating teams and fans outstanding accommodations, restaurants and sports facilities. We know guests travelling to the 2022 Vanier Cup will have a memorable experience, and we can't wait for kickoff on Nov. 26!” Johnson-Stapley added.

The event will be monumental for the Western Mustangs, as the team has appeared in a record 15 Vanier Cup games, having been crowned the winners a total of eight times.

“We’re excited for the opportunity to celebrate Western’s proud football tradition, showcase all the great things our University and City have to offer, and welcome fans from near and far to the newly renovated Western Alumni Stadium – featuring a CFL-regulation-sized playing surface and seating for over ten thousand spectators.”

It was announced by U SPORTS on June 23, 2022 that the City of London and Western University will be hosting the Vanier Cup on November 26, 2022. (Source: U SPORTS)

In addition, Tourism London is excited at their upcoming partnership with Western and U SPORTS, and what hosting the Vanier Cup will mean for the City of London.

“Hosting an event of this calibre continues to highlight London as a premier sport hosting destination in Canada while also providing a significant economic impact to our community. We look forward to showcasing London’s history and passion for football as we welcome fans for the 2022 Vanier Cup,” said Zanth Jarvis, director of sport tourism with Tourism London.

Other cities that have hosted the Vanier Cup include Toronto, Quebec City, Hamilton, Vancouver, Montreal and Saskatoon.