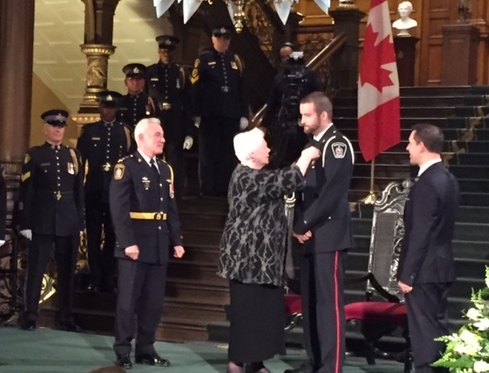 A Chatham-Kent police officer has received a medal of bravery for rescuing a man from an apartment fire.

Lieutenant Governor of Ontario Elizabeth Dowdeswell gave the medal to Const. Fraser Curtis at a ceremony at Queen’s Park yesterday.

“All our officers are heroes amongst us but clearly Constable Fraser's actions went beyond the call of duty in saving this individuals life,” says Chief Gary Conn. “His actions further support and exemplify ‘why’ we chose to become police officers and enter into such an honourable vocation.”

Curtis responded to a house fire call in the early morning of May 7, 2016. Several police were on scene and attempting to gain access to the upper apartment. Curtis breached the door and entered the building alone.

Although he could not see anything, he heard a person coughing from inside an apartment.

Police say they later learned the man had consumed large quantities of alcohol while attempting to cook something on the stove and passed out.

Curtis saw a small gap in the fire and crawled on the floor along the hallway.

Police say the man was conscious and lying on the floor wearing nothing but a pair of boxers, covered in soot, very intoxicated, belligerent and disoriented.

Officers say he was initially confrontational with police and kept asking for the officer to let him back into his burning apartment.

Curtis grabbed the man and physically carried him out of the building.

Police say a few more minutes could have ended tragically for the victim.