London police have laid charges in connection with a bomb scare on Monday at the Central Library.

On Tuesday, investigators officially charged 47-year-old Wojciech Doroszuk, following a bomb threat that closed several downtown streets and forced the evacuation of the London Public Library, parts of Citi Plaza and nearby businesses and apartments.

Doroszuk, of no fixed address, is charged with uttering threats to cause damage, making a false report, mischief and false message. He was arrested on Monday, just after 4 p.m.

Crews responded to the library branch around 3:15 p.m. after receiving a 911 call about two suspicious packages found outside.

Det.-Sgt. Tom Drouillard with the Explosive Disposal Unit says, "Public safety first, you know if these are explosive packages they have severe consequences if disrupted. So, public safety first and officer safety."

A bomb disposal robot, that can capture and send video, take x-rays and more - was brought in a short time later to examine a backpack and a rolling shopping bag-type cart.

The first was detonated by police explosives around 6:30 p.m. while an officer in a bomb disposal suit examined the second and found it was no longer a threat.

Drouillard explains "We will, on occasion, use water. Or we will use other explosive devices to counter charge that explosive device, breaking it apart so that it's no longer going to detonate."

Both were found to have contained no explosives.

Doroszuk was scheduled to appear in court on Tuesday morning. 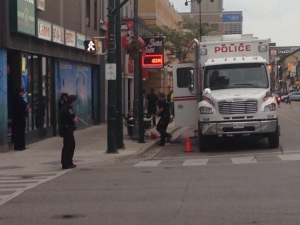