ST. THOMAS, ONT. -- Another act of vandalism at the St. Thomas Elevated Park will result in changes to a signature piece of artwork, and also security on the bridge.

All 11 towers of the artwork entitled 'The Faraway Nearby' were knocked over last week, causing significant damage.

"Ironically we were going to work up a design to make it foolproof, and then this happened," says Serge Lavoie, president of On Track St. Thomas.

Artist Christine Dewancker called the destruction "disheartening," with the blood, sweat and tears put into the project. 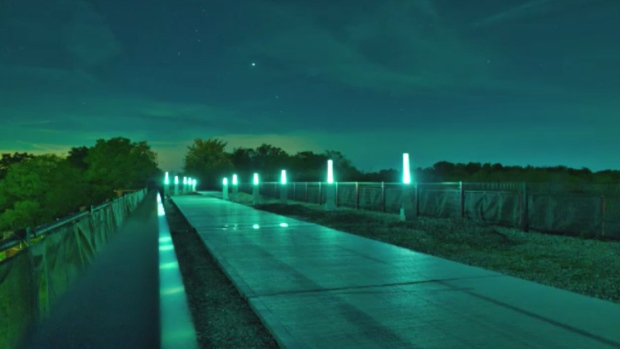 The installation was designed to be temporary and portable, but the changes will make it much more robust.

"One of major changes is [the] internal column will be made of steel and extend down to the bridge," says Dewancker.

"Each block had ability to come apart, and we will change that so each one will be epoxied to the next. It will now be a solid form."

Not only will the sculpture change as a result of the recent mischief, but so will park security.

"Corix from Vancouver gave us $10,000, so we have the start of a really good fund for putting electricity and pathway lightning and a good HD video surveillance system. We were just waiting for the pandemic to die down to get work done."

Dewancker believes that the work will still be susceptible to vandals even with security, due to the location on the bridge, but she feels better that the sculpture won't be re-installed until the lighting and cameras are in place.

This is the fourth time the work has been damaged. In Sept. 2019, the towers were knocked over, and hit with spray paint. The words "Inbred Pride" were written in graffiti on the cement and the lights broken.

Dewancker also says when it is rebuilt there will be a call out to volunteers to help erect the towers.

"Part of my reason to keep positive is that people in the community are enjoying it," she says. "That encourages me to keep revising it. I think its home is St. Thomas, and I want to see this piece there."