He spent over six hours Saturday at Ivey Park downtown, starting with Jesse's face, and progressing to John pushing his son up the hill.

Jesse's Journey was founded in 1994 and named for Jesse Davidson.

This year's annual walk in May was put on hold due to COVD-19. Instead, they are holding a virtual walk Monday.

New this year is the Founder's Challenge which is asking participants to walk 33 kilometres in honour of John & Jesse.

"John walked 33 km a day each of the 286 days he was on the road walking across Canada in 1998," says Perry Esler, executive director of Jesse's Journey.

Esler and his wife have been walking in preparation for Monday's virtual event, and are hoping to achieve 33 km on World DMD day. 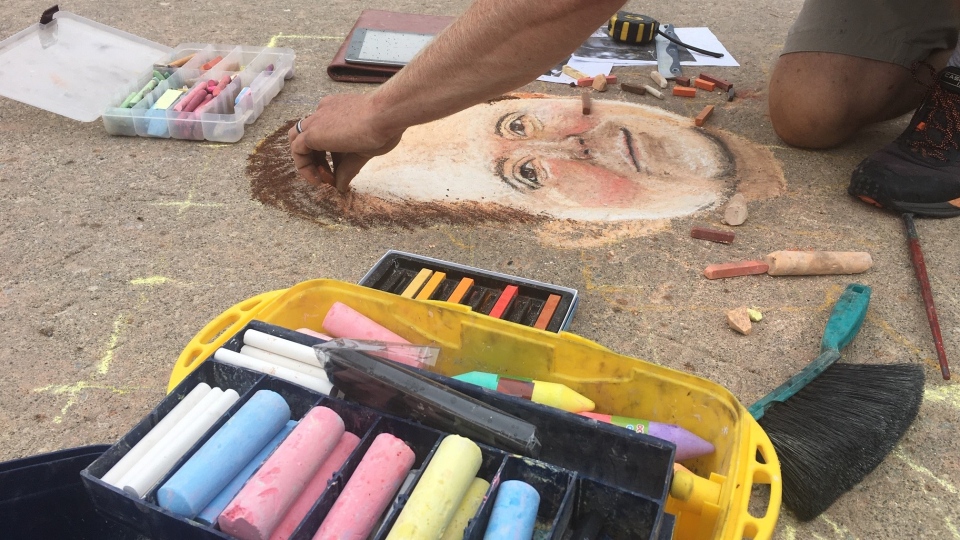 As for the chalk art, Esler saw some of Clelland's work around the city, and decided to bring him on board to raise awareness. "A lot of people know John and Jesse and it draws a great picture back to the original cause," says Esler.

Clelland admits he wasn't really familiar with the story of Jesse's Journey but did a lot of research to make sure to fully understand who he was honouring.

"It's a great location in Ivey Park with people walking and biking by," says Clelland. "People will recognize Jesse here and know the story. Hopefully it will ring true, and raise awareness for Duchenne Muscular Dystrophy."

Those looking to find out more about Monday's virtual event or to donate can visit here.