ST. THOMAS, ONT. -- Fred Kondal may be the most interesting centenarian in Canada today.

The St. Thomas, Ont. resident is so interesting, it's almost impossible to decide how to lead off the story.

After all, the fact he played small roles in the production of three iconic movie franchises - Stars Wars, James Bond and Superman - is just one fascinating part of Kondal's life.

This weekend he will celebrate his 100th birthday with family and friends in St. Thomas. (From 2-4 p.m. Saturday at Braxton’s Tap & Grill)

Here are just some the highlights of Fred Kondal’s life, any one of which would be a story itself.

And he has plenty of recollections from his film work and reflections on life:

On putting makeup on Harrison Ford for his role as Hans Solo:

“I think we kind of aged him a bit, to change his features.”

On Stuart Freeborn, the legendary makeup artist who created Yoda:

“He didn’t have to do much to make the change, because (laughing) he looked like Yoda, so much, naturally.”

On Christopher Reeve, who portrayed Superman:

“He was very pleasant. I enjoyed talking with him. A truly nice actor

On putting makeup on ‘most other’ actors:

“They’d just never stop smoking, blowing smoke in your face while you were making them up. Some of them (laughs) smoked the weed.”

“I was demolished. Every bone in my body was broken.”

What his doctors said about surviving the crash and surviving 10 surgeries after it:

“Wine, women, men and song. And after that walk five to 10 miles at least.” 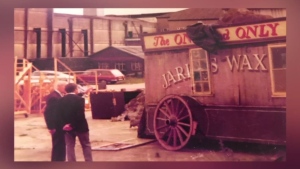