LONDON, ONT. -- A London man calls his dog his closest companion and an important part of his therapy, but now she's gone missing.

Josh VanBiesbrouck says Riley was taken Sunday afternoon and he’s hoping it was simply a case of misguided good intentions.

"She means everything to me. She's my best friend," VanBiesbrouck says. He's devastated by the loss of his one-year-old German Shepherd mix.

VanBiesbrouck went into the Goodwill Industries Community Store at 255 Horton Street West shortly after 3 p.m. and tied off Riley out front.

But when he came out the leash was there but Riley was gone.

"I just thought she got off her leash and was running around somewhere in the area so I was just screaming her name.”

It was then a woman approached and told him a couple had taken Riley. They told the woman they were going to take the pup to a shelter.

VanBiesbrouck says police were called and investigators looked at Goodwill Industries surveillance video, which shows the couple walking with the dog to a car.

That was about seven minutes after VanBiesbrouck had tied her off. 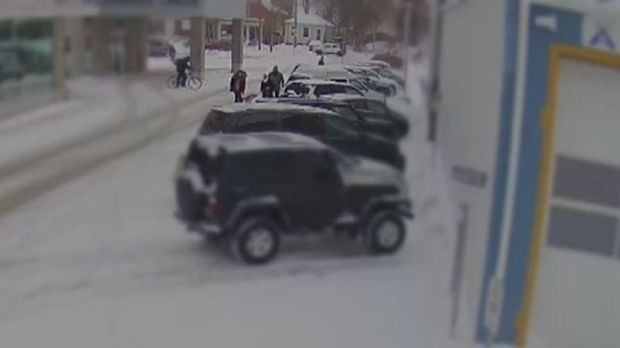 An image taken from Goodwill Industries surveillance video shows Riley the dog being led away in parking lot in London, Ont. on Sunday, Jan. 19, 2020.

"You know it's almost like having…I wouldn't say a child removed from your life but, you know, she's part of my family."

VanBiesbrouck says he got Riley when she was three months old and was planning to have her trained as a therapy dog, a role he says she already plays for him..

"I got her when I was diagnosed with schizophrenia and she's been more-or-less a mental health companion with me."

Police say their investigation is ongoing, including a check of area shelters.

VanBiesbrouck believes the people who took Riley likely live in London's Soho neighbourhood and he's hoping they'll come forward so he can get her back.