Car leaves scene of crash, then collides with a house 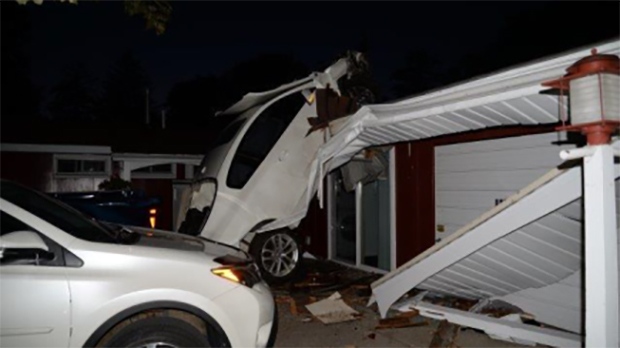 MIDDLESEX CENTRE, ONT. -- A car involved in a crash with another vehicle left the scene, only to hit a house shortly afterward.

Sarnia police were called to the area of Christina Street and Michigan Avenue around 6:40 p.m. Saturday for a two-vehicle collision.

But when they arrived, one of the vehicles had left the scene. No one at that scene was injured.

Shortly afterward, there was another call to police that a vehicle had hit a house in the area of Christina Street and Lakeshore Road.

Officers arrived at that scene to find a car had struck a parked vehicle before ending up partially on the roof of a home.

Sarnia firefighters and Lambton paramedics were able to get the driver out of the car. They were treated in hospital and released.

No one at the home was injured, but police say the property damage was extensive.

The investigation is ongoing, and police are asking the public for any information on either crash, and for anyone with video surveillance along Christina between Michigan and Lakeshore from 6:30 p.m. to 7 p.m. on Aug. 29, to contact police at 519-344-8861, Ext. 6127.