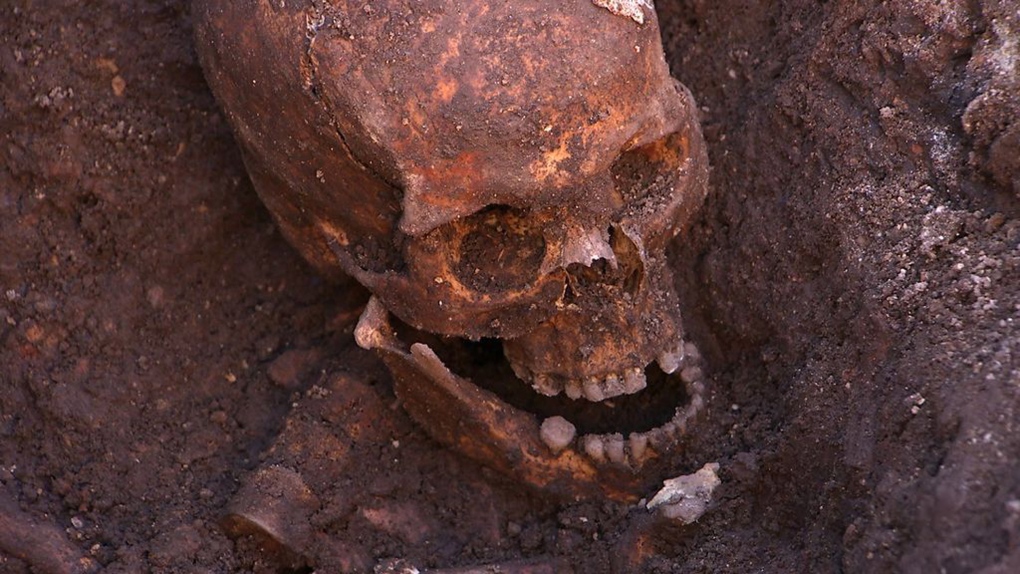 The remains found underneath a car park last September at the Grey Friars excavation in Leicester were declared 'beyond reasonable doubt' to be the long lost remains of England's King Richard III, missing for 500 years. (University of Leicester)

Scientists said Monday it is "beyond reasonable doubt" that the remains unearthed last year under a parking lot in the city of Leicester are those of England's King Richard III.

University of Leicester researchers were able to make the discovery thanks to a DNA sample from Michael Ibsen, who is a 17th great-grand-nephew of Richard's older sister -- Anne of York.

Ibsen, who lives in London, said he was "stunned" to discover he was related to the king.

"It's difficult to digest" he said.

Geneticist Turi King said Ibsen shares with the skeleton a rare strain of mitochondrial DNA. She said combined with the archaeological evidence, that left little doubt the skeleton belonged to the king.

Archaeologists had long sought the monarch's grave, which has been the subject of speculation for centuries.

They, along with historians and local tourism officials, had all been hoping for confirmation that king's long-lost remains had been found.

And so had the monarch's fans in the Richard III Society, set up to re-evaluate the reputation of a reviled monarch.

"It will be a whole new era for Richard III," the society's Lynda Pidgeon said. "It's certainly going to spark a lot more interest. Hopefully people will have a more open mind toward Richard."

The last English king to die in battle, Richard was immortalized in a play by William Shakespeare as a hunchbacked usurper who left a trail of bodies -- including those of his two young nephews, murdered in the Tower of London -- on his way to the throne.

For centuries, the location of Richard's body has been unknown. Records say he was buried by the Franciscan monks of Grey Friars at their church in Leicester, 160 kilometres north of London. The church was closed and dismantled after King Henry VIII dissolved the monasteries in 1538, and its location eventually was forgotten.

Then, last September, archaeologists searching for Richard dug up the skeleton of an adult male who appeared to have died in battle.

Osteologist Jo Appleby said the 10 injuries to the body were inflicted by weapons like swords, daggers and halberds and were consistent with accounts of Richard being struck down in battle -- his helmet knocked from his head -- before his body was stripped naked and flung over the back of a horse in disgrace.

She said some scars, including a knife wound to the buttock, bore the hallmarks of "humiliation injuries" inflicted after death.

The remains also displayed signs of scoliosis, which is a form of spinal curvature, consistent with contemporary accounts of Richard's appearance, though not with Shakespeare's description of him as a "deform'd, unfinished," hunchback.

Researchers conducted a battery of scientific tests, including radiocarbon dating to determine the skeleton's age. They found the skeleton belonged to a man aged between his late 20s and late 30s who died between 1455 and 1540. Richard was 32 when he died in 1485.

The mayor of Leicester, Peter Soulsby, said the monarch would be interred in the city's cathedral and a memorial service would be held.