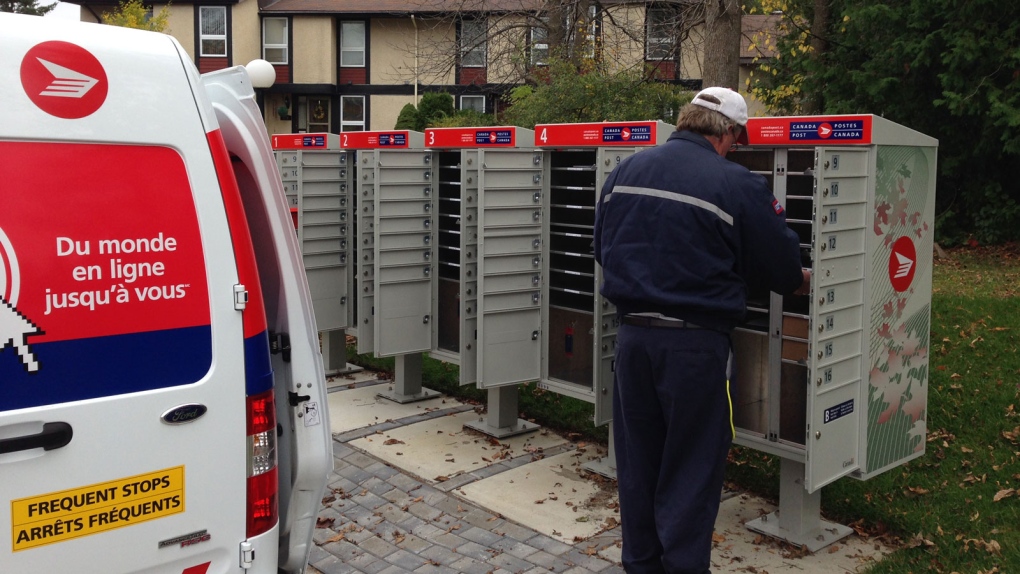 A Canada Post employee delivers letters to one of nearly 500 new community mailboxes in Kanata. About 7,900 homes in the community are losing door-to-door mail delivery service. (Photo: Tyler Fleming/CTV Ottawa)

HAMILTON -- Granting a southern Ontario city control over the placement of large community mailboxes would infringe on federal authority and delay reforms to the national mail service, a lawyer for Canada Post argued Tuesday.

The Crown corporation and the city of Hamilton are locked in a legal battle over a local bylaw that requires Canada Post to obtain a $200 permit per site to install the mailboxes on municipal land.

It would also push back the installation of the city's new mailboxes until next spring, since the bylaw prohibits any work for four months after the permit is issued, he said.

Canada Post is in the process of installing super mailboxes as part of its plan to stop door-to-door home mail delivery, a move court heard is necessary to ensure the agency's financial survival as more Canadians switch to electronic communication.

The outcome of its dispute with Hamilton may have broad implications as the national mail service deals with similar situations across the country.

At the heart of the issue, Laskin said, is who has legal control over the placement and installation of mail receptacles.

Under the federal Canada Post Act, "it is Canada Post's call as to where these community mailboxes are located," he said.

Upholding the bylaw would transfer control over to municipal governments, which is a breach of the federal statute, he argued.

Whether a permit is granted or denied remains largely at the discretion of municipal officials, which only confirms the city's "assertion of control," he said.

Some Hamilton city councillors have said Canada Post hasn't consulted enough with the city and that municipal governments are the "stewards" of the land where the mailboxes are being installed.

Laskin argued, however, that the city had "ample opportunity" to weigh in on the placement of the mailboxes earlier this year, "but it chose, for its own reasons, not to engage."

Canada Post is willing to work with the city, Laskin told the court, but "there's a vast difference between consulting and collaborating and being forced to cede control."

He said there are mechanisms in place to address constituent concerns over safety, privacy and litter, and Canada Post's own standards call for the mailboxes to be "as safe and accessible as possible."

Lawyers for the city will begin their arguments Wednesday. The judge is expected to reserve his decision.

In addition to its legal battle with Hamilton, Canada Post is also facing a lawsuit from a union representing postal workers that wants the Federal Court to declare the cancellation of home delivery unconstitutional.